DECISION MAKING AND THE WILL OF GOD: 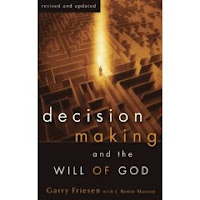 I don't typically like to write book reviews because it seems most peoples' reviews are, "This is one of my top 3 favorites and is a must read", and I don't want that to be me. Howeer, I do like to comment on books that challenge my thoughts and positions when I think they are worthy of attention as they address worthwhile issues. While I basically applied many of the tenets of the "wisdom view" (which I will briefly explain) prior to ever purchasing this book, my position was more reinforced after completing it. In fact, I thought, "Whew, it really is ok for me to use my own brain in making difficult decisions."

As the title of the book reveals, the premise surrounds Christians' methods for making decisions. The authors present the two common views to making decisions: the "traditional view", and the "wisdom view".

The traditional view of guidance follows the general guideline that God has a specific plan for each person's life, and the Christian's challenge is discovering that specific plan. If not found, he faces the consequences for operating outside of God's perfect will for his life. This is what the authors call "the dot", the center of God's specific will for the believer. Finding that specific will is often "found" in terms of "hearing God's voice", "inner impressions", "fleeces", and "the leading of the Holy Spirit", etc. The pro's and con's are presented fairly in the part of the book addressing the traditional view of guidance.

The wisdom view of guidance follows the general guideline of three circles, one large circle, one smaller circle in the the middle of the large one, and an even smaller circle in the center of the middle circle. (Imagine the top-side view looking downward on a three-tiered wedding cake.) The large, all-encompassing circle represents God's "sovereign will", that part of God's will where nothing is outside of His control. The medium-sized circle inside the large circle of God's sovereignty is the "moral will" of God, that part of God's will that says the Bible is the revealed moral will of God for each believer (for example, God desires (moral will) that all men would be saved, but all men are not saved (sovereign will)). Inside the medim-sized circle is the smaller circle called "freedom."

An example might be, "Should I take such-and-such a job?" The traditional view presents the Christian agonizing over whether or not he rightly hears God's voice, correctly interprets promptings, or is within His perfect will. If God's perfect will is for him to take the job and he does not take the it, then everything that follows falls outside of God's perfect will. On the other hand, the wisdom view presents the Christian with reason and God-given wisdom to make the best decision he is equipped at the time to make. In the long run, it may not have been a good decision, but he is able to learn from his mistakes and make better decisions in the future. A bad decision from the traditional view, however, leaves the Christian wondering if he is right with God since he didn't hear the perfect guidance for his decision.

WHAT I LIKED ABOUT THE BOOK:

I also liked that the authors didn't just quote scriptures as proof texts to support their case. Instead, they took the time to exegete the scriptures within their proper contexts.

The authors provide critiques of the myriad books relating to the issue of decision making in the Christian's life.

WHAT I DISLIKED ABOUT THE BOOK:

As a result of scores of exegeted texts, and the myriad of opposing issues within the debate, and the volume of book critiques, Decision Making is extremely long (423 pages)...so long I was getting bored with the late chapters. However, I think that is simply a testament to how well the authors explained both sides, that by the latter portion of the book, the reader had the ideas well-ingrained.

If you struggle with or question how to properly make decisions, you may want to check out this book. But be sure to have lots of time on your hands, because it will require much of it!
at 9:18 PM