HEAVEN IS FOR REAL, by Todd Burpo 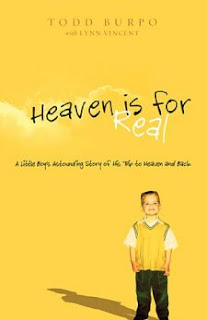 This is a story about 4-year old Colton Burpo, who, according to his father (author and pastor) Todd Burpo, had a heavenly experience when he died briefly on the operating table.  Throughout the course of the book, young Colton reveals bits and pieces to the family about heaven, Jesus, family in heaven, etc.  It is a very easy read and only 154 narrow pages in length.

THEOLOGY:  I've never been thoroughly convinced of what we call today "near death experiences", or NDE's.  I don't recall any accounts in the Bible like the ones given by those who claim to experience them.  The experiences relayed to us in the Bible about heaven are from the standpoint of visions: Ezekiel, John, and Paul to name a few.  In those situations, though, the men were alive and well and in their right minds when they had the visions.  They did not die on earth, depart for heaven, only to return again to tell the story.  Instead, God gave them the visions as they lived on earth.

Unfortunately, the Bible doesn't provide us any interviews with those who died and were raised from the dead.  Those people seemed to live in obscurity as they followed Jesus...if they even followed at all.  It is interesting that the authors of scripture did not include these peoples' accounts of what heaven or hell was like.  I wonder if it's because they never happened or if they were skeptical themselves.

So, what explains the explosion of NDE's in modern time?  I don't know. Hollywood?  Vivid imaginations?  Bad tacos?  Nevertheless, I found this book very hard to believe...although the story was told and written well.  One aspect of the account that renders it unbelievable is the following conversation between Colton and Todd (p.72)

"Everybody's got wings," Colton said.
Wings, huh?
"Did you have wings?" I asked.
"Yeah, but mine weren't very big."  He looked a little glum when he said this.
"Okay...did you walk places or did you fly?"
"We flew."

I haven't yet come across a Biblical account of saints in heaven wearing wings, let alone flying from place to place with them.  We read of saints in white robes (in Revelation), but no wings.  We read of angels with wings (Ezekiel), but no saints.  This is one of those aspects of the story that make me believe it's more about a 4-year old's wily imagination than a true heavenly experience.  (Other portions of the story render it unbelievable, but I only have so much space to write.)

Rating: 2 out of 5 stars...not for theology, but for at least having the courage to put this story out there in print.  Also for the readability.