ANSWER THE CALL TO BE A MAN: 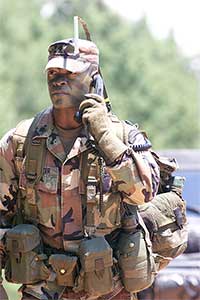 For much too long, many men have been slapped in our faces for not being around more.  We've been nailed to our crosses for not having "been there" enough for our families.  This, I think, is especially true of our parents' generation: My dad is a veteran of the Viet Nam war who went on to work 40+ hours each week, and his generation has been tagged with setting a bad example for their children for being gone so much, for not opening up emotionally, for not being available.

We are now being told by the professionals who can't get their faces out of textbooks that things must change.  We're told to spend fewer hours at work, fewer hours with other people who need us, fewer hours doing chores.  Yet we're told to be more active in our communities, more loving, more approachable. Those are good things to be, but I don't think my dad did it all wrong.  Was he perfect?  No.  But was he wrong? Heck no!

By now you're likely thinking, "Holy crap!  Where are your priorities, dude?  How dare you suggest men put work ahead of families!"

I have a terriffic wife and she has never, EVER laid this burden on me.  Not once!  She has been the consummate mother and wife, allowing me to pursue a noble career fighting crime in exchange for her pursuing a noble stay-at-home wife/mom career.  I am not writing this because there is angst in my home.  On the contrary!

The purpose in my writing is two-fold. First, to offer forgiveness to those fathers who have nobly been doing their best.  The second is to give permission.

My heart hurts that so many honest, hard-working, upstanding men have been shamed for doing what God has created us to do: work, provide, defend.  The drive is in our blood to give the best to our families by giving the best to our employers; it runs in our blood to provide food and necessities to those we love most, and if we shirk our duties at work, then we ultimately shirk them at home.  It runs in our blood to defend: not only our families, but our fellow countrymen and strangers at home and abroad against the wiles of cruel, harmful, wicked people.

And those types of men are not just serving in the military or police. They are farmers, computer programmers, mechanics, gear-heads, businessmen, politicians. Flight 93 wasn't thwarted by a US Navy SEAL, but by everyday, average Joes who rose to the occasion to defend their families and countrymen by giving up their own lives.  We need a highly select set of men to be the best Navy SEAL's, Special Forces Soldiers, Army Rangers, they can be.  But we really need men of all ilks to be "on call" 24-7 to defend all of humanity.


We're being told not to fight anymore. We're being told to "turn the other cheek".  We're told to raise our hands and surrender.  Do you think Jesus intended you to cower in the corner of the room while an enemy broke into your house and began ravaging your wife and children?  Certainly not!  He would call you a fool for not fighting, for not standing guard!  But today we're told otherwise by liberal professionals.

Being on call 24-7 in my line of work doesn't necessarily give me a sense of great satisfaction or superiority; nor does it give me the chills that I will miss some pretty important family functions.  I will likely miss out on baseball games, science fairs, piano recitals, camping trips, family movie/game night.  And my family will miss me being there.  I know it, and it hurts to know my family may be hurt in the process.

When I was a youngster, I wished to see my dad at more of my baseball games and tournaments.  They were important to me, and I thought they should be important to him.  As I grew older, however, I realized that he was doing that which was just as important as America's past-time for kids: he was earning a living, working to provide for his family so that his son could play ball and have a drum set, and his daughter could own a piano and drive the family car.

I admire that now -- because I'm a father and I understand some things have to come ahead of family once in a while.  One day my sons will recognize that their dad would have to miss those family days because at the drop of a hat he had to rush off to defend a stranger from the likes of humanity's worst offenders.  And they will grow to understand the supreme importance of defending the life, property, and rights of others.

I am, however, giving fathers permission to be men -- not that men need MY permission, but we men do need permission and encouragement.  Men, be men!  Provide for your family.  Work hard for your employer.  Defend what is noble and just.  Fight for what is right.  Set good examples for your children, and for your neighbor's children, that men should carry out responsibilities with dignity and honor.  Be the man God created you to be.  Be strong!  Be courageous!