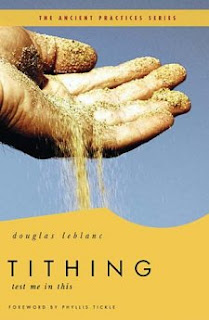 In the early pages, Leblanc admitted that he learned a valuable rule in his journalism career: "It's not about you."  Using that rule, "Tithing" takes a story-telling, journalistic approach than a teachy-preachy one.  It is less "why" and more "how".

"Tithing" is book 5 in the "Ancient Practices Series" by Phyllis Tickle.  It is only 152 pages long with a short study guide at the end, so it's not a book one would spend a long time reading.  All the stories seem to follow a similar format, so it makes for a quick read.  In preparing for the book, Leblanc toured the country interviewing people involved in various organizations asking why tithing was important to them.  But each chapter is a story of it's own; the chapters don't build from one to the next.  Instead, readers could realistically pick up the book, choose a chapter, skip around and there would be no confusion of information by doing so.

Personally, the story-telling model did not appeal to me.  I got bored very quickly with the book, and had I not agreed to read it entirely in order to review it, I most likely would have jettisoned it at the end of chapter 1.  In fact, after finishing the 2nd chapter, I set the book on my nightstand and remarked to my wife, "I hope this book gets a lot more interesting pretty quickly."

On a positive note, what the stories/chapters brought out is the fact that there are faithful people all around the world doing great things for God's Kingdom with His money.  We seem to find ourselves admiring people like this, yet we are reluctant to live as exemplary as they do and give as deeply.  It is a wonder how the world would look today if we spent more of our time and efforts praying and giving?  It is clear that the model in the Old Testament intended tithing as a means of providing for the poor and needy.  The same theme emerged in "Fasting", by Scot McKnight, when he directed us to Isaiah who taught that fasting ought to lead us to giving.  At the very least, "Tithing" has opened my eyes to seeing giving in a little bit different light.

LIKES: I did like that Leblanc cited others efforts and organizations, giving practical ways we can give above and beyond a simple offering plate.  He not only cited those organizations, but also provided web links for readers to get involved in their efforts.  My favorite chapter was #10, "Do They Tell Such Stories About Me and You?"  In that chapter, Leblanc interviewed Rabbi Yisroel Miller.  Miller pointed to some strong support in the Torah for tithing.  Unfortunately, Leblanc didn't accentuate these points.  He simply allowed the chapter to die with the conclusion of the interview.

DISLIKES: Very little scripture was used or taught throughout the book.  I would have liked to see more of an authoritarian teaching on biblical giving, rather than an "anything-goes" method.  Also, it seemed far too often that the people telling their stories tithed because of how it benefited them.  Chapter 4, entitled, "Earnest Money", contained the story of John Schwiebert, whose view of tithing was summed up in this way: "If you become a member of Metanoia, you agree that tithing is the platform in which you enter into membership."  To him, "the tithe [was considered] earnest money."  I don't think the Bible's intent for tithing was for it to serve as a membership fee as though one paid a monthly or weekly membership to the fitness club.  I would have liked to see Leblanc challenge some peoples' faulty notions of tithing.  They could have served as teachable moments.

You'll notice I haven't quoted much from "Tithing".  That's because in my opinion there wasn't much to quote.  Overall, I give "Tithing" 2 stars out of 5.  I think he put a lot of work into interviewing people of various organizations, but I didn't see him expounding on the teachable moments.  I don't think I could recommend the book because I was honestly disappointed with it.


Disclaimer: I receive books from Thomas Nelson Publishers (Booksneeze) free of charge in exchange for my unbiased opinion of them.  I am not threatened or rewarded in any way in efforts to encourage me to provide a positive review.  All opinions are mine.
at 1:56 PM