"ISLAM, THE CLOAK OF ANTICHRIST", by Jack Smith 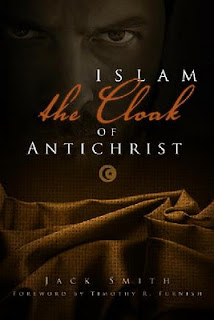 The following is my review of WinePress Publishing's new release, written by Jack Smith, "Islam: the Cloak of Antichrist".

First, I feel obligation to inform you that this book is a thick and slow read.  Although a heavy read, it's not boring by any stretch of the imagination.  Be warned: Do not think you will simply skim through it if you hope to take anything away from it.  Instead, I would suggest having your Bible (and even a Qu'ran if you can get your hands on a free one) next to you for reference and cross-reference as you go.  This book was thoroughly researched and referenced.  Of it's 350 pages, 50 pages consist of Smith's bibliography.

THEME: The basic premise of the book is this: Satan hides himself in his deceptions, never showing his face.  Instead of revealing his hand, he disguises himself as an angel of light.  He's sneaky and he's witty, but he also knows he's defeated.  That's why he must deceive and trick.  Islam, says Smith, is his cloak of deception; it's his "religion of peace".  Not true peace, but the kind of peace that only comes by submitting to Islam.

FORMAT: As far as the format goes, I absolutely appreciated the way Smith put the book together.  He begins with the basics of Islam, so even if the reader knows absolutely nothing about Islam, s/he will by the end of the book.  Smith then builds each chapter upon the preceding chapter(s).  But he doesn't simply present facts and references just once, expecting his readers to remember it all at first glance.  Instead, he repeats the foundations over and over again as those facts weave their way into the big-picture story.

MID-TRIB / PRE-WRATH: For those afraid to consider the possibility of any eschatological view other than a pre-trib rapture, you may as well ignore this book.  But if you are looking into differing opinions on the matter, this book is a great start.  Smith lays out his interpretation of biblical eschatology quite convincingly.  I think many people are in the same boat in which I find myself: pieces of each theory sound plausible, but I just don't know how to piece them all together.

Smith's eschatological view is A "Mid-tribulation / Pre-Wrath" rapture of the saints.  Smith presents his reasoning that saints will endure the first half (3 1/2 years) of the Great 7-Year Tribulation, the onslaught of the Beast.  At the Tribulation's mid-point, the saints will be raptured away.  After the saints are removed, the final half (another 3 1/2 years) of great distress will be reserved for the Beast and those who follow him and his religion: Islam.
I had one difficulty with the book.  Near the latter quarter of the book, Smith explains how Islam ties in with the eschatological view he presents.  There, he details the alliances of countries that make up "Gog" in the great, final battle.  Due in part to my confusion, in part to my skepticism due to past teaching I've received, and in part to the sheer amount of information, he lost me.  Not because I disagreed or thought he wrote something wrong/bad, but because it was just so much packed into a short space of the book that I found myself losing focus.  I had to re-read several sections in the latter parts of the book.  All that said, it's likely just a difficulty I had.  But I appreciated the applications Smith presented.
Most interestingly, this book is more than a simple theory of what he believes the last days will look like.  Smith reveals how Islamic prophecy is actually very much in line with Christian prophecy.  (You may need to read the book in order to fully understand that statement.) He reveals how Satan has always had his hand on the scabbard throughout history, and how he is wielding his sword with more fervor in these final days approaching the end of days.  He reveals many things that have been kept from our eyes, and much of it is not pleasant.

CONCLUSION: Whether or not one agrees with Smith's final eschatological assessment, we are none-the-less forced to answer one question, as stated in the forward by Timothy R. Furnish, PhD: "...what all Christians should keep in mind as they read this excellent and well-researched book is this: pre-, a-, or even post-millenialism isn't the key issue; rather, how Christians will respond to Islam is."

WEBSITE: A website for the book is available to read portions of the book and to listen to lectures via WMA files.  There is also an interactive blog that connects prophecy with current events.

AUDIO CONTENT: Unfortunately, the audio content on the website is in WMA format, rather than MP3 or WAV.  So it is not compatible with iTunes or MP3 players in that format.  But this is my review of his book, not his website.  This part is just added bonus material.


Disclaimer: I received this book free of charge from WinePress Publishing in exchange for my unbiased review.  I was not threatened, coerced, or promised favors in exchange for a positive review.  All opinions in this review are mine.
at 7:26 PM