"SEAL OF GOD", by Chad Williams, with David Thomas 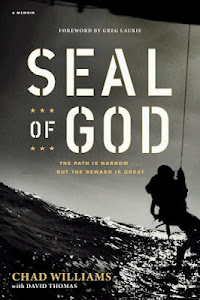 Former US Navy SEAL Chad Williams takes his readers on a riveting journey not only into the life of a SEAL recruit, but the aftermath of what faith in Jesus Christ did to his mindset and his career.

Williams grew up in a "Christian" home, but was distant from God and rebellious most of his young life.  Without much other direction in life, he decided one day that he wanted to become a Navy SEAL.  Growing frustrated with his immaturity, Williams' dad contacted a former SEAL, Scott Helvenston, to run Chad through the ringers.  The meeting would not dissuade Chad Williams, but instead served to created an ongoing, mentoring relationship between a former frogman and an up-and-comer.

Williams allows his readers to witness a heart-pounding account into the daily life of a SEAL recruit enduring BUD/S class, especially the grueling 5 days known as "Hell Week".  Once graduated from BUD/S, Chad Williams was a full-fledged Navy SEAL.  The pinnacle of every young man's dreams, right?

In his own words, Williams said he continued living in rebellion, only this time like a "rock star".  He drank obscene amounts of alcohol, picked fights, you-name-it.  Although he was at the top of his game, Williams was still longing for more.  But in order to get his parents "off his back" for being a drunk rebel, Williams agreed to attend an event hosted by Greg Laurie.  As it turned out, Williams would not merely attend that gathering, but he would be cut to the heart by the conviction of the Holy Spirit.  From that day, Williams life would be dramatically changed.

Taking his new life in Christ with him to work, Williams would discover that life as a Christian was no bed of roses.  His SEAL teammates grew to hate and distrust him, thinking he could not truly be a trustworthy, ruthless teammate as a Christian.  They would even persecute him to within an inch of his life.  He was the recipient of a severe beating, and after an investigation he would be transferred out of SEAL team 1 to SEAL team 7.  His pursuit following his conversion was to become an evangelist.  While in the Navy, he dedicated him to be a "SEAL for God", which is where the title of this book is derived.  He would eventually complete his 6-year obligation and leave the Navy.

LIKES: The story of Chad Williams is riveting.  I didn't want to put the book down, especially while reading the first half.  It encouraged me to be not only physically courageous, by spiritually strong and courageous as well.

DISLIKES: It's difficult to criticize a book written by a man who endured much more hardship than me.  (Especially when he could kill me in my sleep before I ever knew it was coming.)  Williams is not a self-proclaimed theologian, but an evangelist.  To some degree, all believers are theologians and we must be careful in how we present scripture.  But there were passages that were cited out of context, such as "no weapons formed against you shall prosper", etc.  Williams used passages similar to these to help him tell his own life story, rather than using them carefully to tell the story of Jesus Christ.

CONCLUSION OF THE BOOK: Williams did a great job showing men (the primary audience for the book, I think) that being a Christian is not for weaklings and sissies.  The conclusion of the book tied a shortened version, yet decent, gospel message into the story of his own life in a much more cautious way than I would have expected a SEAL to present it.  It wasn't bad; just soft.

RATING: I loved reading "SEAL of God", and I can't wait to find the right person to whom I will give my copy of this book.  It is 280 pages long, but reads much shorter than that.  I give "SEAL of God" 4 stars out of 5.  Pick up a copy today.  You will not regret it.  Then buy a copy for a young man.


DISCLAIMER: I received this book free of charge from Tyndale House Publishers in exchange for my unbiased review.  I was not threatened or coerced to provide, or promised any rewards in exchange for a positive review.  All opinions are mine.
at 11:25 AM