A "Conversation" with Penn Jillette: 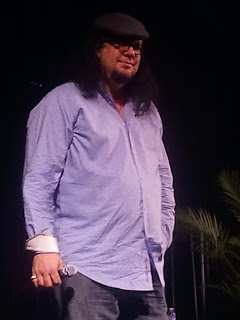 A dear friend of mine (who blogs over here) is a Christian-turned-atheist, and he invited me to an event hosted by the Center for Inquiry, Michigan chapter.  CFI is an organization that seeks to promote humanism, secular thought, skepticism, reason, science, etc -- as if nobody else can promote science and reason, but I digress.

Anyway, the guest speaker for the evening was Mr. Penn Jillette, of Penn and Teller.  If you didn't know, he is a staunch atheist.  Yes I attended an event where I was outnumbered 350-to-1, I think.  I even bought his new book about a month ago, "God No!" for a whopping dollar-fifty at a used book sale (even though it was a new release!).  No, I'm not afraid to read what the "other side" has to say about my own beliefs.  I can honestly say I enjoyed myself.  Penn is hilarious...if you can get past his vulgarity and crassness, anyway.

I took three main thoughts away from last night's event.  Over the next three posts, I'd like to blog about them: (1)a statement about "conversation" that is especially important to Christians, although it was directed toward atheists; (2)a strong rationale for why Penn is atheist, a question that is quite difficult to answer, to be honest; and (3)a question from an audience member about "unity in community" and Penn's response.

Penn admits to having heard atheists ask him, "What's the one slam-dunk argument I can pose to Christians to convince them they're wrong?".  His reply is simple: "We need to respect evangelicals enough to tell them the truth, to be able to tell them 'You're wrong'.  But we can't intend to change minds by manipulating them.  Instead, we need to be about conversations."

This ought to sound familiar to us Christians.  Unfortunately, I recognize that it may not, because far too often our tactics have been quite contrary.  Street preachers stand on boxes and social-action groups hatefully picket, both of whom seem to incite anger and hostility more than inviting respectful dialogue (yes, both sides are to blame for the vitriol); Gospel tracts are often laid out in  public places, including break-room tables and sinks, for unsuspecting persons to pick up; etc.  We've jettisoned careful conversations in favor of a mass-production mindset.  For some reason, we think we need to reach the world as fast as McDonald's turns out burgers.  Why are we in such a hurry?  I understand the message is important.  I understand "today is the day of salvation."  But where is our trust in the Spirit of the Living God to convert sinners?

At some point, a conversation that has slow-cooked needs to arrive at a destination where the gentle approach becomes more firm.  Sadly, many people don't recognize when the proper time is to do this.  We go to jerk mode wayyyy to soon and we turn people away from our position.  Penn suggests the same is true of the atheist position.  At the proper time, jerk mode is necessary and appropriate.  But save the jerk mode for later; Take your time.  There is no one knock-out "punch" or slam-dunk argument.

Christian, trust the Holy Spirit to work in a sinner's life.  After all, it took time for it to sink in for you, didn't it?  If you're like me, it's STILL sinking in.  If you think you need to convert someone today, then I have to ask, do you trust the power of the gospel to change lives?  Our job as disciples of Jesus Christ is to plant the seed, to tell the good news of Jesus Christ, to be a living testimony of the glory, majesty, and mercy of the Cross.  The Holy Spirit's job is to convict and convert sinners.  Not ours.  We must be faithful in our part, and we must trust that He will be faithful in His.

Do not fear the opposition.  Instead, learn from them.  For you may recognize they are pointing at your own weakness.  I will finish using his own words: "We need to respect [atheists, muslims, buddhists, etc] enough to tell them the truth, to be able to tell them 'You're wrong'. But we can't intend to change minds by manipulating them. Instead, we need to be about conversations."

What say you?  What style or approach do you suggest/prefer?
at 8:36 PM