"By Faith, Not By Sight", by Scott MacIntyre, with Jennifer Schuchmann 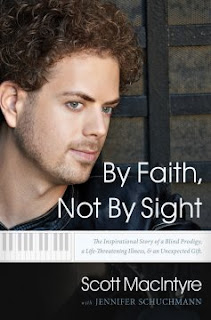 I have to admit, I wasn't even remotely interested in reading this book, not until my wife and I discovered our 7-year old son suffered a detached retina.  After two unsuccessful surgeries, he will likely be legally blind in one eye, barring a miracle anyway.  When I received the news, my world was rocked.  And that's when I requested this book, looking for some hopeful insight into the life of the visually impaired.  I'm glad I did.

Scott MacIntyre was born blind and can see only as much as a pinhole-sized opening will allow.  His mother decided at a young age that she would not allow Scott to play the victim's role, and instead expected him to carry himself like any other person who could see -- "don't walk with your head down", "look in the direction of the voice speaking to you", "face into the camera and smile", etc.

As a result, Scott would grow into a successful student and musician.  His life's hope was that his music would inspire those who listened, and glorify God in the end.  Scott would move through the ranks of American Idol and become one of its top finalists just a few years ago.  He lived up to his hopes and inspired many.

The story got a little boring around the half-way to three-quarter mark.  I was gripped for the first half, then the same-'ol-same-ol' page after page lost my attention and desire.  The story picked back up when  I wondered what would become of his sister's situation.  His sister suffered a similar condition and was confronted by a near-death illness.   I'll not spoil the outcome for you.  Truth be told, I wasn't very interested in the "American Idol" phases of the book.  Maybe it's because I'm not a fan of Idol.  Nevertheless, Scott overcame great odds to make it to the country's most popular stage.

I was inspired by Scott that quality of life does not have to end with visual impairment, or any other disability for that matter.  At one point in the book, Scott said he would not trade his blindness for sight if it meant he also lost his musical talent at the same time.  That requires great courage...I don't know if I could say that.