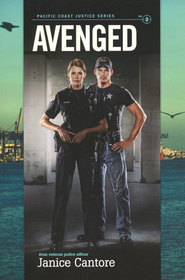 After I finished reading "Avenged", I visited a retailer website to read other reviews of this book.  Honestly, I wanted to read what others had to say because I thought so little of this book.  I find it interesting how two different people can read the same book or watch the same movie and walk away with entirely different opinions of it.  Well, here goes nothin'.
I'll sum up my opinion of the book in one word: LAME.  You're free to spend the $10 on the book if you want, or you could simply take my word for it.  I think the target audience for Avenged would be more appropriate for teen-age girls, to be completely honest; it definitely wasn't a GUY book.  Sure, there were guns, explosions, police chases, etc, but the main-main character was a chick, and the main characters were married -- not exactly a combo to grab a guy's attention (see the cover photo for a better idea).  I thought is was rather minor league compared to today's popular suspense authors.
The author, Janice Cantore, is a retired Long Beach police officer, so there's no doubt she has the experience to write a good police novel.  Unfortunately, that didn't come out in this.  Now, maybe I have a low opinion of it because I, too, am a police officer and maybe I happen to judge "cop" books and shows rather critically.  But I don't read Flynn or Baldacci in that way, so maybe I expected Cantore to be similar.  She wasn't.  Or maybe it's that I didn't read the first two books of the trilogy and was missing something with the character development.  In any case, I wasn't enthralled in the book's plot.
I found there were many times Cantore wrote in "cop lingo" without explaining the lingo to her readers very well, if at all.  Maybe she expected her readers to know the lingo already.  But even as an officer myself, there was lingo that I don't use, have never used, and have never heard used by other officers.  So, it makes me wonder if she was trying to push the cop thing just a little too hard rather than simply letting it happen.
But I digress.  I did like the fact that her characters struggled with realistic issues of faith and practice.  They experienced realistic stresses and pressures, and faith-talk was intertwined into the story well.
Beyond that, there's not much  bragging I can do for the book.  I give it just 2 stars out of 5.
Disclaimer: I received this book free of charge from Tyndale House Publishers in exchange for my unbiased review of it. All opinions are mine. I was not threatened or coerced to provide a positive review.
at 9:12 PM