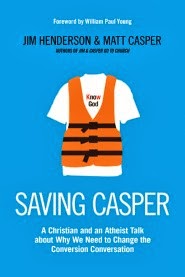 "Saving Casper" is a tag-team effort by a Christian (Jim Henderson) and an Atheist (Matt Casper) in which the two address how Christians do evangelism.  It is a follow-up to their first book, "Casper Goes to Church."  In that work, the two detail the initial project of inviting Casper into the world of Christianity -- not in efforts to evangelize him, but to get feedback about what Christians are doing right, and where we seem to have it all wrong.

Henderson wrote in the later stages of the book that his purpose was not to "save" Casper, but to "save" the Church.  He and Casper each flesh out what exactly they mean by "save the Church" throughout the entirety of this book: how can we live and look more like Jesus Christ in our life and witness?

PUSH vs PULL STRATEGY:  One of the ideas presented is that Christians often have a "push" marketing strategy for evangelism, which means this: Christian A meets person B; A then proffers B with a sales pitch.  "Eventually", writes Casper, "someone gets pushed away.  After all, a push only goes in one direction." (p.114)  The two then proceed to proffer the "pull" strategy, which is based on "pulling" someone toward you.  In other words, A meets B; A shows sincere interest in B's life; A lives his Christian witness without pushing B; eventually B is drawn to what A has.  Casper explains, "When you 'pull market', you do things that will naturally and eventually attract someone to you." (p.114)

While I understand fully the principle Casper offers in this theory, I do have some doubts about its completeness.  After introducing the push-pull market, Casper offers a hypothetical scenario, suggesting one of the greatest things a Christian would want to hear is, "I want to know more about your beliefs: Tell me what it means to be a Christian." (p.114)  He suggests that living the "pull" lifestyle will naturally attract "outsiders" toward you and such questions would be the end result.  He suggests people would want to know what fuels your service and selflessness, so they would ask.

The problem here is not in living the "pull" lifestyle -- I think we Christians should live that way daily.  Instead, my issue is that Casper's paradigm seems to suggest we should never offer the gospel to anyone, even if in a winsome way.  In his theory, we ought to wait until being asked.  We can all describe events and/or name people who encountered an unbeliever without having first been friends, and the gospel "seed" was planted in a winsome way.  Let's be honest, not everyone asks.  Maybe I'm illuminating my own weakness here, but my unbelieving friends have never asked why I'm kind and helpful to others.  They simply think I'm a nice guy and leave it at that.  We live in a culture that is largely afraid to open up and ask personal questions, mainly out of respect for the person's privacy.

THE HELL ISSUE: Casper addressed another interesting topic, which is the issue of hell.  In many interviews and speaking engagements he and Henderson conducted, one of the two men always asked the Christian crowd, "Do you think Casper is going to hell."  Without fail, most in the audience raised their hands. Casper talked about how easy it seemed for Christians to consign someone to hell, yet that we -- ironically -- take the matter so lightly.  I don't think he said these words, but the perception I took from it is this: If Christians truly cared about people going to hell, then why don't more Christians live as though it matters?  Casper and Henderson were not opposed to talking with non-believers about the hell issue; they simply recommend not starting there.  "Hey, how are you?  You're going to hell.  Nice to meet ya'."  While this is tongue-in-cheek, that simple greeting sums up how we are perceived to be living our Christian lives.

Henderson wrote, "Believing in the current evangelical version of hell is kind of like that.  We say that everyone who hasn't accepted Christ as Savior will go to hell, yet we sit in front of TVs, play video games, go out to dinner, play...No wonder nonbelievers don't think we really mean what we say about hell.  If we did, we would be living a very different kind of life." (p.19)

WALK THE WALK:  I was hit in the face with a two-by-four when Henderson remarked, "Beliefs about hell and other mysteries are important, yes; but they're not nearly as important as practices." (p.21)  I have to agree.  I don't think God is going to ask me at the Judgement if I can adequately explain the doctrine of eternal security.  However, it is likely that Jesus will ask, "Did you feed the hungry?  Did you clothe the poor?  Did you care for orphans and widows and the elderly?  What did you do to put what you say you believed about me into practice?"  That hits home.

CONCLUSION:  I'll be honest, I was impacted greatly by what was expressed in "Saving Casper".  But I also have to admit that I'm confused about how I will share the gospel.  I don't completely "buy into" the method of waiting to share until asked; yet I also don't like the method of cramming something unwanted down someone's throat.  If Christians spent our time living by the Holy Spirit and living daily in an attitude of prayer, then He will lead us into intersection with others who need to hear the good news about Jesus Christ -- either as friends, acquaintances, or complete strangers.

RATING: I give "Saving Casper" 5 stars out of 5.  While I may disagree with some things, the book caused me to pause and think deeply and critically about my own life and example.  Any book that can do that was worth my time reading.

DISCLAIMER:  I received this book free of charge from the Tyndale Blog Network (Tyndale House Publishers) in exchange for my unbiased review of it.  All opinions are mine and were not forced upon me in exchange for a positive review.
at 7:38 PM