"Samson: A Savior Will Rise", by Shawn Hoffman (book review)

I'll say it right up front: This is probably THE single most important book I have ever read.  I have read a great many books about theology, apologetics, biblical teaching, etc., but most hold only a faint candle to "Samson", by Shawn Hoffman.  I do not say that because those topics are weak, but because "Samson" drives home such real-world biblical issues like courage, humility, sacrifice, love, and strength.

When I saw this title available for review, I read the description and wasn't initially inspired to request it.  But something drew me to it a few days later, but I cannot pinpoint what it was.  I'm very thankful I did.

BACKGROUND: "Samson" is an inside look at Auschwitz in novel form, focusing on four main characters: Samson -- the hero/savior; Maximilian Kolbe -- Polish priest (pictured at right); Commandant Rudolf Hoss (alternate spelling, "Hoess") -- the camp senior officer; and Josef Mengele, the notorious "Angel of Death".  At the very least, Mengele's name ought to appear familiar to most readers.

Kolbe, Hoss, and Mengele are real people who existed in real time, while the book's support characters are amalgamations of real-life people.  An amalgamation is when two or more things are combined into one.  Thus, the characters may not be individually real, but combinations of real peoples' stories.  All of this was combined into one epic novel that provides readers with a glimpse into the tortures that awaited over 6 million Jews within the fences of Auschwitz -- a glimpse that my American education (and likely yours, too) never broached.

While Adolf Hitler is not to be without blame, Josef Mengele's sadistic, evil mind led him to, as Louis Bulow wrote,"torture men, women and children and did medical experiments of unspeakable horror during the Holocaust. Victims were put into pressure chambers, tested with drugs, castrated, frozen to death. Children (pictured at left) were exposed to experimental surgeries performed without anesthesia, transfusions of blood from one to another, isolation endurance, reaction to various stimuli. The doctors made injections with lethal germs, sex change operations, removal of organs and limbs....a number of medical experiments, using twins. These twins as young as five years of age were usually murdered after the experiment was over and their bodies dissected...injected chemicals into the eyes of the children in an attempt to change their eye color. He carried out twin-to-twin transfusions, stitched twins together, castrated or sterilized twins. Many twins had limbs and organs removed in macabre surgical procedures, performed without using an anesthetic."

HOPE: "Samson" is filled with descriptive horrors (like these above) to which I believe no person should be ignorant.  But intertwined with the horrors of Auschwitz in this story is a hope for tomorrow.  That hope would be found in one man, Samson, who would be forced to box other inmates for German entertainment.  The winner receives extra rations of food; the loser goes to the gas chamber.  While Samson struggles with the notion of being the hope for his enslaved people, one Polish priest, Maximilian Kolbe, encouraged Samson with hope of his own.  As the two became close in Auschwitz, Samson struggles with doubt and the question of the ages, "Where is God?"  Kolbe not only explains biblical truth to Samson, but demonstrates it by later displaying a sacrifice of his own.

RESEARCH: This book was highly researched, as is evident in the myriad footnotes adorning the bottom of many pages.  Hoffman provides Internet and book resources that provide the factual basis for this story.  While Hoffman took some fictitious liberty, I found it difficult to figure out where truth stopped and fiction began.  It was that interesting and well written.

When I was approximately 3/4 of the way through the book, I found a documentary, "Auschwitz - Inside the Nazi State" on Netflix.  The two closely resemble each other that it seemed the two could have been released as a set. 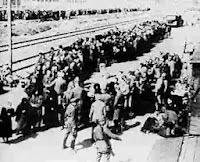 EMOTIONS: I would be remiss to ignore the emotions that were stirred within me as I read this book.  There were times when my jaw dropped in awe and disgust, when my heart fluttered with excitement, when my cheeks reddened with anger, and when my eyes welled with tears.  I read one section about the "selection process" (pictured at right), where mothers and children were separated -- many of the children sentenced to immediate death -- to my wife.  When I finished reading, tears dripped down her cheeks, and she tearfully replied, "I don't know how they did it, but I wouldn't be able to give up my babies."

I think this book inspires many questions and forced answers: Would you die for someone you didn't know?  Could you sacrifice your life for a greater cause? Where do you place your faith during dark hours and days?  Do you encourage others to act in great strength who seemingly cannot continue another day?

RATING: I cannot say it enough: I was deeply and profoundly moved by this book.  Mostly, I think, due to my prior ignorance of the topic.  If you read no other book this year, you must -- MUST -- read "Samson".  You will not regret it.  That said, I give "Samson" 6 stars out of 5.  If there were more stars available, I'd use them.

DISCLAIMER: I received this book free of charge from Booksneeze (Thomas Nelson Publishers) in exchange for my unbiased review of it.  All opinions are mine.  I was not threatened or coerced into providing a positive review of it.
at 3:01 PM