The Human Craving for More:

It's the day after Thanksgiving, here in America.  While the holiday USED to be about being thankful, I'm not so sure any longer.  No doubt, not everybody believes in God, but it's still an opportunity to set aside a day to put on a thankful mindset and celebrate all the good things in life. 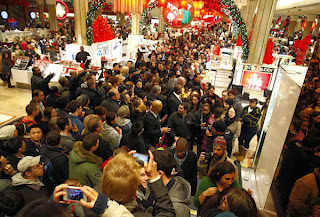 Sadly, however, Thanksgiving is growing more and more about what comes the day AFTER -- Black Friday.  Oh the good deals to be had!  Black Friday has driven our society (or has society driven, and even DEMANDED, it?) and economy that it no longer begins on Friday, but the Thursday evening of Thanksgiving day!

Companies that once touted family values have fallen prey to the almighty dollar.  Employees who once celebrated with family members around the dinner table are now forced to feed the machine.  They are now away from the family institution, and are, instead, working for the greedy corporation.

On the other side of the planet, however -- in fact, it seems is so far removed from what we experience that it must exist in an altogether different world -- millions of starving people are praying for just one meal.  Today.  While we Westerners clamor for the newest high-def television set with surround-sound theater style amplification, people on the other side of the globe are dying.  We snack on soft pretzels and soda, or sticky-buns and juice; we eat lunch and dinner at restaurants where the average American probably throws away 30% of what sits on his plate.  But this child wastes away with nothing in his stomach. 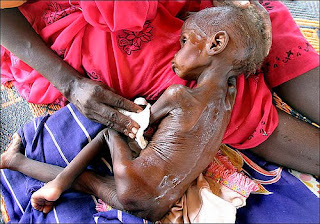 I wonder.  What if this sick child was lying curled up on his mother's lap outside our nearest retail store?  Would we throw a dollar or two in the bucket so we could continue on about our shopping frenzy, feeling better that we "helped"?  Would we hurry by, ignoring her, acting as though she wasn't there?  How many would dare take them into our own homes?

I wonder what this little child would think if she could see the images of crowds pressing forward for the newest smart phone, or the you-name-it gadget that will either become obsolete in a year, or relegated to the closet of useless toys that never satisfied our human craving for more.

I wonder if you realize that if you can read this, you are among the wealthiest people on the planet.  You have a computer that gives you access to this blog, but 80% of the world's population lives on less than $10 per day (1). That's not an EXTRA 10 bucks they can spend on this or that; that's living expense!  Around the world, 21,000 children die each day due to poverty-related issues (2).  They “die quietly in some of the poorest villages on earth, far removed from the scrutiny and the conscience of the world. Being meek and weak in life makes these dying multitudes even more invisible in death." (1)

But let's face it, it's relatively easy to read about this.  We can feel a little empathy or even anger, and then move forward with our easy lives just a few minutes later.  But what will we actually do about it? What will YOU do about it?