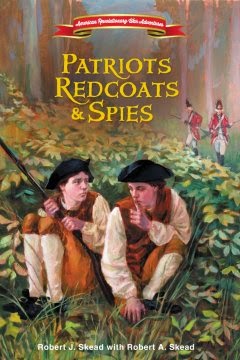 I requested this book for review because my 9 year-old son was studying the founding of America at the same time this book was made available.  I told him I had requested the book, and that it was my hopes that he would read it and type a review.  This book is written for youngsters, so I thought it would be best for a youngster to read and review.  What you are about to read are HIS words, not mine (I only helped with very minor editing for flow), so please be graceful when you read my 9 year-old's thought processes and sentence structure.

HIS REVIEW:  There were two kids named Ambrose and John and their father gave them a letter to give to George Washington about the secret plan the Redcoats were going to play on them. When they were gone they had to get horses. They arrived at a barn to get some horses to ride but they had to do a trick to get the horses. They did their trick and they got 2 horses.

When they rode in the woods they got caught by some spies. Their father told them to trust no one and that’s what they did. They rode off into the distance.

When it was getting dark they went in to the woods and slept for the night. In the morning they saw someone took their horses. They went to the thief’s camp and they got their horses and rode away. When they rode away they got to George Washington’s house and got caught by his guards. The guards took them to Washington. When George Washington saw the kids he said to the guards to let them go and give them bread.

So the kids gave him the letter. He read the letter, which said the Redcoats were going to attack. He got right to work on preparing for the fight against the redcoats.

DISLIKES: I liked the pictures, but they weren’t as nicely drawn as in some of the other books I’ve read.

RATING: I would give this book a 4 out of 5 stars.

DISCLAIMER: I received this book free of charge from BookLook Bloggers (Zondervan).  None of the opinions were forced upon us, and we were not required to provide a positive review.
at 1:52 PM