"Prayer: How Praying Together Shapes the Church", by John Onwuchekwa (book review) 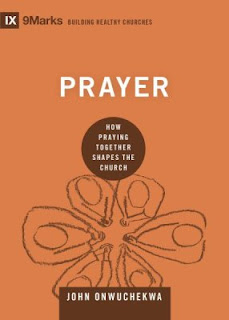 Prayer: it's vital to the Christian life, yet is so often neglected.  This little book from the 9Marks series is an encouragement to the church, and applying brother Onwuchekwa’s suggestions would yield positive results.   For those who may be tempted to think they don’t need to read yet another book on prayer, please don’t be so quick to write this one off.  This book is not so much a “how-to”, but more of a call to corporate action, to put into practice what we so often put off.

In the early chapters, Onwuchekwa discusses what prayer is and what it is not.  His call to corporate action is warranted because, first, we are the body of Christ, not simply a collection of individuals.  But secondly, when we pray corporately, those who are more mature in faith can instruct those who are less mature in faith what biblical prayer entails.

Brother Onwuchekwa also encourages a revival of the apparently-forgotten “prayer meeting”.  He suggests praying corporately outside of the typical corporate gatherings on Sunday mornings.  He details the many perks to having these kinds of prayer meetings, namely that it can be more formational and instructional.

I did something different with this book.  Rather than make underlines, I took notes on it.  When I finished reading it, I scrolled by through my notes to re-read it all.  As I did, three points stood out (to me) above the rest.  (Disclaimer: others may find other points more crucial.

First, Onwuchekwa wrote, prayer is calling on God to come through on what He has promised.  This statement came in chapter 2 as he was discussing what prayer is and is not.  The reason; I found this statement to be so helpful is because we often get in a rut of praying for little things like Aunt Betty’s big toe, or my mother’s sister’s unlce’s brother’s cousin who is having a root canal, rather than praying for more urgent kingdom matters.  We know God cares deeply for Aunt Betty and that distant relative, but we also know that He is concerned more for the condition of our souls more than for our comforts.  When we pray what God has promised, we know we pray His will, AND it requires us to have and seek a deeper theological understanding of God’s word.

A second statement that punched me in the face was found in chapter 4, as he encouraged readers to pray for provision, pardon, and protection.  He wrote, To neglect a single day of praying for forgiveness suggests we are ok with God based on our performance.  I so often fall into the trap that even though I know my works don’t save me, I think my good behavior for a while after a fall makes me ok with God again.  It’s as if I think of God as a forgetful parent who threatens discipline in the family car on the way home from vacation, but then is assuaged when I help fold the laundry.  Not so with God.  Instead, even though we are in Christ by His completed work, I ought still be daily asking for God’s pardon....not a reducing the fines, not a delaying of the fines, but a complete pardon for my sinful offenses.

Rating:This has truly been a helpful book, and I plan to share it with my pastors and elders.  I give this one 5 out of 5 stars.

Disclaimer: I received this book free of charge from Crossway in exchange for my unbiased review of it.  All opinions are mine, and I was not required to provide a positive review of it.