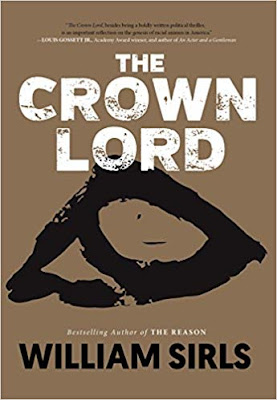 "The Crown Lord" is the newest release by William Sirls, in which he attempts to put the racial shoe on the other foot, so to speak. This book found its genesis while Sirls, who is white, was serving time in federal prison with a black roommate. Sirls admitted that their time together helped each of them see less color, and more of humanity.  As a result of their time together, Sirls promised his roommate that he would write a book with a storyline that intended to reverse roles as it pertains to race.

Quite literally, just about everything in the stortline was reversed.... whites were degraded with a slanderous name, stereotypes of whites liking certain types of food and beverages, social ills and pressures, etc.  On the other hand, blacks were in the majority and held the positions of prestige and power, etc.  Imagine all the same actors of today's world just with opposite skin colors.

Unfortunately, Sirls attempt in this book didn't affect me the way I'm sure he had hoped. I didn't find it inspiring nor truly thought-provoking. Instead, it was simply too cliche for me.  Let's be honest, calling whites "pinkies" will never carry with it the same  vulgar undertone that the N-word does. I appreciate his efforts at trying to help white people understand the minority situation by putting the proverbial shoe on the other foot, but it just failed to inspire me.

Additionally, the storyline itself never captured my attention, and therefore never sustained my attention. I honestly struggled to get through this book. That disappointed me, because I really liked his first release, "The Reason".

Another aspect that I didn't like was the especially vulgar language. I'm not opposed to occasional swearing in books or movies, because I know that is real life. But this book was replete with vulgar language, which did nothing for me.  Sometimes crude language can enhance a particular mood or thought, but there was so much of it in this book that it detracted from it instead.

My promotional copy indicates that the book was to sell for $25.95. Barnes & Noble Cary it for just over $23, and Amazon carries it for roughly $17. Unfortunately, I would be disappointed if I paid more than $5 for this book. I appreciate his efforts, but see above.

I give this book just two stars out of five.

Disclaimer. I received this book free of charge in exchange for my unbiased review of it. All opinions are mine, and I was not required to provide a positive review.
at 6:41 PM