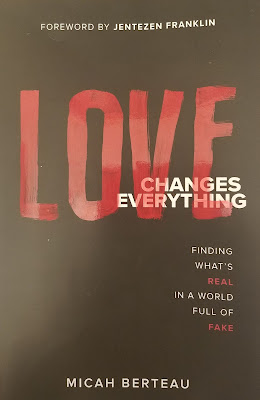 Because I have so many areas I want to touch on with this review, I'm not really sure where to begin…so I will simply start from the dust cover and work my way in.

Exposition?
The back cover informs readers that Love Changes Everything is an unpacking of the powerful love story from the Old Testament: Hosea.  Reader be advised, though, this is definitely not an exposition of Hosea, but a rather shallow use of Hosea’s book to support what Micah Berteau likely already had intended to write.  How might we know this? Of the 15 chapters contained in this 195 page book, a full six chapters never even mention or refer to the story of Hosea and Gomer! For a modern book based upon a biblical one, I guess I would expect every chapter to dig into it.

References and Referrals:
I tend to judge whether I’m going to read any particular author by the people who they request to endorse their books.  Authors request endorsements from other people they know and/or trust…so the selection process is no accident.  I also tend to judge a book by the people the author quotes within.  I couldn’t help but notice the very first endorsement for “Love Changes Everything” was written by none other than Brian Houston, a pastor with a troubling theology. This raised a yellow flag before I dug further into the rest of the book, but I wanted to give Berteau a fair shake.  Unfortunately, I noticed some of his go-to authors also included questionable teachers/authors such as Christine Caine, Craig Groeschel, Rick Warren, and Dale Bronner.  To be fair, Berteau quoted Augustine, A.W. Tozer, and C.S. Lewis, but to quote dangerous teachers truly concerns me.  Two yellow flags now.

Nevertheless, I was still willing to give Micah Berteau a chance to prove himself on his own merits. I’ll say this right up front: To his credit, he never once called God's love reckless, as does the unfortunately popular song that has been sung in so many churches.  Thankfully, Berteau points his readers to the powerful, gracious, eternal love of God.

Who is Worthy?
However, from the earliest pages, Micah Berteau explains Jesus died because of our worth.  He writes, “Jesus spread his arms on the cross to show you your value.  God gave his only Son to show you your worth.  Value is not birthed from what you do but the position you are in.  Your position as a son or daughter of God is your worth…When you know your value, you walk and talk differently.  Your value is not measured by…Your life is worth so much…” (p. 30).

The problem is that we are indeed born in sin, even conceived in sin (Psalm 139).  That means from day one of our conception we are sinners in need of a savior.  Sadly, Berteau’s starting point is in placing great value and worth on humanity, rather than on Jesus Christ; Berteau tells the reader s/he is valuable, not that his/her sin is great.  God Himself declared we are sinners with wicked, deceitful hearts (Jeremiah 17:9), and outside Christ we are worthy only of condemnation.  Sadly, the unrepentant sinner reading this book will not learn that message from Berteau; s/he’ll not learn of the need for Jesus in their depravity.  You see, Jesus died because our sin is so great to a perfectly holy God; our sin is so damning to us that we needed a perfectly sinless savior who is worthy, who is of highest value – Jesus Christ.  Jesus died because perfection is what it took to save fallen sinners!  His worth, His value; not ours.

Message Translation
Another issue that raises flags is when pastors and authors cite the questionable Message translation of the Bible. It is a dangerous and misleading translation and should be avoided, but so many pastors these days seem to want to dumb down the scriptures for some reason (maybe for softer, easier swallowing by their hearers), but this translation changes the meaning of so many passages that it’s just not worth it to read from it.

Anything Good?
I don't only want to take this space only knock this book, as there are obviously some good things in it.  First, his style of writing is highly encouraging to the reader.  He reminds the reader to remember God’s love.  “We are called to look to the goodness of God…It is God’s goodness that has spared you in those moments you were about to go off the rails.  God’s goodness came through for you every time, and yet you wonder whether his goodness has departed from you because of how you are living” (p.141). For a reader battling against depression or doubt, Berteau is indeed encouraging!

I would also like to offer Berteau kudos for one chapter in particular, chapter 8: “Highest Bidder”.  In that chapter, Berteau discusses how Hosea went to the public auction to bid on Gomer, who was already his wife. Students of scripture understand that Hosea's book is not only a true account of Hosea and his pursuit of Gomer, but is a parallel of sorts of God's dealings with his adulterous, unfaithful people.  While it was written about the ancient Israelites, it remains true today that God continues to pursue and ransom those who are His. I think this was Berteau’s best chapter, as it most clearly laid out the Gospel of Jesus Christ.
End Notes:
To put the nail in the coffin on this book, Berteau included just six end notes/citations.  Did he not research what those who have gone before us have studied and written?  A mere six notes was pretty lame, in my estimation.


I thought the overall punch of this book was not very strong, and it’s reaches were not very deep.  It lists for $15.99, according to the cover.  Regardless of the price, I just cannot recommend purchasing this book.  Too many flags.

Rating: I give “Love Changes Everything” just 2 out of 5 stars.

Disclaimer: I received this book free of charge from Handlebar Publishing in exchange for my unbiased review of it. All opinions are mine and I was not required to provide a positive review. 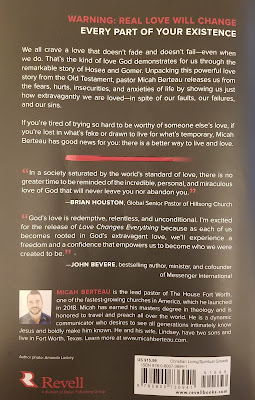