"THE SACRED JOURNEY", by Charles Foster 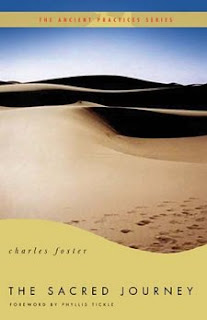 I'll be completely honest: I wanted to gouge out my eyeballs with a cereal spoon after reading the first few chapters.  I could barely stomach reading the rest of the book.  I didn't feel as if Foster had much useful to contribute to the conversation about spiritual discipline, so I basically put my pencil away about half way through.

WHY I DISLIKED "THE SACRED JOURNEY"
1) Foster's lack of biblical support; suggesting Christians journey rather than settle in.

2)  Foster's use of other religions' teaching to suggest Christians practice that which was not suggested by God.  Universalism / Inclusivism.

3) Foster's citing of several stories of "walking" in the Bible as proof for God's preference for pilgrimage.

LACK OF BIBLICAL SUPPORT: In an effort to convince his readers we should participate in "pilgrimage" as a spiritual discipline, Foster cites more non-Christian literature than he does the Bible. Most of those quotations come from Muslim, Hindu, and Buddhist clerics. In his own words, Foster wrote, "I quote a good deal from the pilgrim literature of other religions" (p.xviii). I think this is the case because there doesn't seem to be much support for arguing that pilgrimage is a command/desire/requirement of the God of the Bible.


Foster attempts to argue on behalf of Christian pilgrimage by citing biblical references of Jesus telling people to walk with him. "Walking" with Jesus, according to Foster, is the command to journey, to be a wanderer, to be like the Bedouins. Sadly, the notion for Christians to be pilgrims requires a stretch of one's imagination and of the biblical account. Foster also cites a few Old Testament stories, saying God tried to turn settlers into wanderers. Unfortunately for Foster, the ones he cites don't seem to support the idea of pilgrimage either.


UNIVERSALISM / INCLUSIVISM: As has been the case with just about every book in this series edited by Phyllis Tickle, Foster places Christianity on par with Islam and, in this book, with Hinduism and Buddhism.  There seems to be such a minor difference among the religions (according to the editor and author) that the book seems to teach a form of universalism.  Foster never takes his readers to the Cross, something I would expect of a Christian author convinced Jesus Christ is the only way of salvation and unification with the Father in Heaven.

At one point, Foster cites a Hindu sage as teaching that wandering leads to the destruction of the wanderer's sins (p.91).  This notion is completely foreign to the gospel.  Never does Foster set out to guide readers about sin and salvation through Jesus Christ according to the Bible.  He seems comfortable quoting anti-Christian rhetoric to support his notion of pilgrimage.

PREFERENCE FOR PILGRIMAGE? It's not like cars have been around since the dawn of time. Unless people were wealthy enough to own a horse in the old days, just about everybody walked wherever they went. Since they walked together, they talked. It's really not much different today except we drive long distances. We travel; we talk. But if Jesus came today instead of the first century, I doubt He would put His stamp of preference on driving over walking or bicycling. It was simply the culture of the time to walk. This hardly supports a nomadic lifestyle commanded by God.

EXCLUSIVITY OF CHRISTIANITY:  In chapter 1, Foster lays out the idea of pilgrimage by presenting it from the vantage point of Islam (p.4), Hinduism & Buddhism (p.6), and Christianity (p.7).  When presenting pilgrimage according to Islam, Foster writes, "The Hajj -- the mandatory pilgrimage to the one Mecca -- reminds Muslims that there is one God, Allah; that he spoke very specifically to one man, the Prophet, in this place; that there is only one true revolution against unbelief, this one" (pp.4-5).

After reading that passage, I wondered to myself, "Will Foster be so adamant in his profession that Christianity is as exclusive in its boasting about Jesus Christ being the only means of salvation, as Islam does about Allah and Muhammad?"  Just a couple pages later, Foster finished his brief introduction to pilgrimage, answering my question.  No, Foster did not tell of Christianity's exclusivity.  In fact, he seems to hold more respect for Islam's exclusivity than of Christianity's.

PILGRIMAGE AND MUJAHIDIN?  On page 11, Foster made an interesting statement about Christianity's crusaders. Having briefly detailed events of the Crusades, Foster told of a Cross, something he says the Christians used as kind of a good luck charm, being carried off in triumph by the hordes of Islam.  Foster asked, "Had God definitely withdrawn his favor from his crusading mujahidin?"  I found in interesting that Foster would call Christian crusaders "mujahidin", a term Muslims use of warriors who fight for Islam and Allah.

WHAT IS THE GOSPEL?  In chapter 2, Foster retells a story about a group of religious men and women sitting around the table for a meal, when they happened upon the topic, "What is the gospel?"  Foster referred to those who believed the gospel was about the redemption of sinning mankind to God through Jesus Christ as though they were a group of confused individuals.  Foster said, "I sat glumly at the table, wondering if I had completely missed the plot.  The plot I had been reading that afternoon was very different...It's just, 'Follow me.'  You will struggle to find in the Gospels anything obviously analogous to 'conversion'" (p.24).

But if the gospel was simply "Follow me", then why would the Apostle Paul go to such great lengths to warn believers and fellow teachers about false doctrines, about false gods, about false teachings?  Jesus, as a teacher, did nothing different from what Aristotle, Plato, or other teachers in the early centuries did:  They walked.  As they walked, they taught; and as they taught, they gathered more followers.  Jesus told people to follow Him, to learn from Him, and not follow and learn from the worldly sages.

Journeying doesn't save a person.  Being in the wild doesn't "cleanse the soul", as Ted Nugent wrote in "Fred Bear".  There's only one way to be restored to right position with God, and that is through none other than Jesus Christ -- a fact Foster ignores in "The Sacred Journey."

I don't think this book contributed to the conversation of spiritual discipline, and I don't think he accomplished what he intended, convincing me of the necessity or importance of practicing pilgrimage.  I wouldn't recommend this book to anyone, and I'm quite disappointed that a Christian publishing company would publish this as a Christian work.  I rate "The Sacred Journey" 1 star out of 5.


I receive books free from Thomas Nelson (Booksneeze) in exchange for my unbiased review of those books.  I am not threatened or rewarded in any way to provide positive reviews.
at 11:10 AM