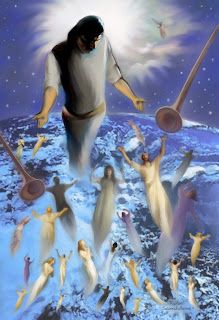 Lately, it seems that around every turn I hear someone somewhere mentioning the "rapture", a still-of-the-night whisking away of the bride of Christ into the presence of our Lord. I think people are ever more talking about it because of our economic turmoil, global warfare, mass catastrophes, etc. As has been the case for several years now, rapture proponents continue saying, "We're in the last days." It’s so common to hear and say that I wonder if people have really given it much thought.

According to the “left behind” theory, there will be a rapture of the Church just prior to a 7-year period of tribulation. Those not taken away into Glory are "left behind" to receive several seasons of torment for their wickedness. But what does the Bible say about those who are left behind? Does it suggest WHO will be left behind? Here are some historical, biblical examples to help us navigate our way.

#1- The Great Flood (Gen 7). When God told Noah His plans to flood the earth, He told him to build a huge ship in order to spare some of His creation. Who was removed? Not Noah, but the wicked. Who was left behind? Not the wicked, but Noah. The wicked were swept away in judgment, and Noah was left behind to replenish the earth and dwell in it.

#2- Sodom & Gomorrah (Gen 14). When God told Abram His plans to destroy S&G, Abram pleaded with God on behalf of the righteous remnant. Although there were very few, God agreed to spare the righteous. Who was "carried away"? The wicked, once again, were swept away in judgment, while Lot and his family were left behind to dwell on the earth.

#3- Passover in Egypt (Ex 12). When God told Moses His plans to destroy the firstborn not consecrated by the lamb's blood, Moses took word to the Pharoah about the pending doom. When Passover occurred, was it the righteous who trusted in God's word who were judged? No, the faithful were spared -- left behind -- and the faithless wicked were judged.

#4- The Exodus (Ex 14). When the Pharoah finally let the Hebrews leave, he later changed his mind and chased after them. His armies chased the Hebrews to the Red Sea where he had them cornered with no escape. Or did he? The Hebrews were not rescued by God by flooding THEM in the Sea and taking THEM "home" to be with Him forever. No. Instead, it was the wicked who were swallowed up in the sea in judgment, and the righteous left behind on dry ground to worship in the land.

#5- Israel's futile invasion attempt at Canaan (Num 14). After God told the Hebrews to take Canaan, spies were sent in to develop a battle plan. Their plan turned into cowardice, refusing to enter and conquer it. However, two warriors - Joshua & Caleb - refused to bend to peer pressure and instead chose to trust God's promise to them. When the Hebrews later attempted to enter Canaan against God's command, they were ransacked by the Canaanites. So, who was taken away? Righteous Joshua & Caleb? Were they taken away by the Lord so they would no longer have to contend with their faithless brothers? No. Instead, THEY were left behind to one later day enter the land of promise, while their faithless brothers were swept away in judgment.

#6- Elijah on Mt. Carmel (1 Ki 18). This one is by far my absolute favorite story in all of the Bible, second only the the Passion week of Christ for sinners. Elijah put out a challenge to the prophets of Baal: Build an altar, put a bull on it, and whoever's God answers with fire...that god is God. I can just imagine Elijah reclining in his lawn chair sipping on an ice-cold lemonade while watching the antics performed by the prophets of Baal. He even goaded them a bit: "Yell louder, maybe he's sleeping or busy doing something else!" I love it. Observing the debacle long enough, Elijah summons the onlookers to himself and his altar. Rubbing salt in the prophets' fresh wounds, he tells them to pour buckets and buckets of water on the altar, soaking it thoroughly. Yahweh answers with an all-consuming fire and devours the sacrifice. Immediately thereafter, Elijah was taken away in a rapture so he could escape the prophets' godless nonsense, and they would be left behind to fend for themselves against God's judgment. No! That's not at all how the story goes. Instead, the false prophets were swept away in judgment while Elijah was left behind to worship God in the land and spread the good news that Yahweh is God over heaven and earth.

#7- Esther and Haman (Esther). Haman's sinister plan to wipe out the Hebrews backfired on him. With the same gallows that Haman built to destroy the Hebrews, he himself was hung from it. Who was spared and left behind to glory in God? You guessed it. And who was swept away in judgment? Bingo! Wicked Haman.

#8- The Tribulation (Matt 24). When Jesus foretold the Roman conquest and sacking of Jerusalem and her temple, he warned the people to flee to the mountains. "Run for your lives when you see the abomination that causes desolation in the temple, for you know that judgment is right at the doorstep. Otherwise, you will be destroyed with your city." This language harkens to the days of the first Passover. Whoever did not believe His word was doomed; but whoever trusted what Jesus said would flee the city. In 70 AD, who was left behind, the righteous or the wicked? Exactly. It was those who trusted Christ at His word who were spared and left behind. The faithless doubters were mercilessly slaughtered by the Romans.

CONCLUSION: The Bible actually provides several examples (and this list is not all-inclusive) as to what the "end times" will conceivably resemble. While I have no lofty notions in my head that I have all of God's eschatological events figured out, I can say with relative certainty that the "left behind" (popularized by Tim Lahaye) theory is not very plausible. If we are careful to follow Biblical precedent, then we’ll leave “left behind” in the dust.

So who REALLY gets left behind? What do you have to say?
at 7:49 PM

Email ThisBlogThis!Share to TwitterShare to FacebookShare to Pinterest
Labels: Theology