A WEEK OF ANTI-RELIGION: 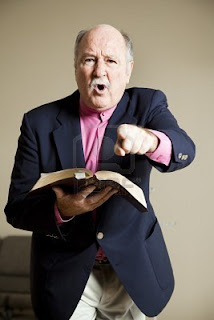 It's easy to point fingers at the "other side" and say their position is the wrong one.
You name the issue and the divide is present.
Whether racial, political, or religious, the other side is ALWAYS wrong.
We always wish "they" could look honestly at their position, evaluate it's stupidity, and jump the fence to the "right" side of the issue.

I'm going to jump into an endeavor this week to see religion from an outsider's perspective.
I'm going to criticize "religion".
Not God, but religion.
And, boy, do I have some criticisms.

A friend of mine, Bret, is an atheist.  Has been for quite some time after de-converting from Christianity.  We've had some thought-provoking conversations and I appreciate his candor.  He recently posted thoughts on his blog about religion, and I asked him why so many atheists put so much effort into disproving somthing they believe doesn't exist in the first place.

Based partly on my question, Bret jumped into a week of being anti-atheist.  I liked that he was honest about the stupidity of some of his brothers' and sisters' (certainly none of his own, though) views.  I thought it was an intesting idea, so I'm going to do the same.

I'm going to be anti-religious for one week.  I will start with a "Top 10 Senseless things Christians Do".  I will approach "religion" from a "Christian" perspective, since that's what I am and it's what I know best.  I think I have a good inside track on what we do that is so insanely stupid.

I hope you'll join me.
I hope you'll consider things you've seen or done...or do.
Maybe in the end we'll stop being so religious and start resembling Jesus more.
at 8:48 PM