"It is Well", by Dr. Mark Dever & Dr. Michael Lawrence 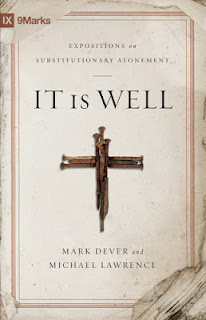 In times such as these, when the central issue of the gospel of Jesus Christ -- Substitutionary Atonement -- is called into question, mocked, and disgraced, "It is Well" is a much-needed resource.  True to their expositional style of preaching at Capitol Hill Baptist Church in D.C., "It is Well" is chock full -- cover to cover, front to back 216 pages, 14 chapters -- of exposition on one single topic: substitutionary atonement.

The argument has been leveled by skeptics that the "absurd notion" of substitutionary atonement of Jesus on the cross for sinners looks more like child abuse than it does atonement.  After all, they question, how could it be anything less than appalling for a god to kill his own son to pay for another's sins, as if that would work anyway?

I like the way Dever and Lawrence describe what atonement looks like.  Imagine a man who falls into a deep ocean from a pier.  He cannot swim, so he begins to flail his arms trying to stay afloat. Another man dives into the water, saves the drowning victim, but in the end only dies himself.  He is a hero for saving the life of a man who could not save himself.

But our culture has likened substitutionary atonement to the following parable.  Imagine a man who is sitting on a pier fishing a deep ocean.  He cannot swim, so he stays on the pier.  Another man runs up and says to the man on the pier, "I'm going to jump into this ocean and drown for you".  So he plunges headlong into the ocean and dies.  However, the man on the pier thinks to himself, "What a fool!  I did not need him to drown for me, for I am just fine."

Sadly, that's what many think about the sacrifice of Jesus Christ on the cross for the sins of the world.  We tend to think we are inherently good and that we do not need to be "saved" from anything.  After all, we're not even drowning in the "ocean", so to speak.

But the bible teaches us that we all are drowning, and the state of man before God apart from Christ is utter hopelessness!  Yes, we really do need a savior!  But not just any savior, a perfect Savior that would completely satisfy the wrath of God on our behalf.

And Jesus Christ has done just that!  He died the death that you and I deserve; bore the wrath that was directed at us; took the punishment that was due to us!  Jesus' death was not merely a good man's example of how we should live.  No, it actually accomplished something.  And God's wrath has been satisfied completely for those who trust in Jesus Christ.

That is the theme of every page in "It is Well".  The cross is the focal point.  Each chapter begins with an introduction to the passage being discussed -- from both Old and New Testaments.  And the authors do a fantastic job relating the story of the cross to both Christians and non-Christians, Believers and non-Believers alike, for each author regularly addresses his "Christian brothers and sisters" as well as his "non-Christian friends".

This book is very well formatted and easy to understand.  As one could easily imagine, however, there are some pretty "heady" truths and big "Christian-ese" words that require definition.  Not to fear, Dever and Lawrence not only define these terms, but they explain them in such detail that mature and immature believers, as well as those who have never picked up a bible, could easily understand.  This book is not a "fast" read.  You have to be willing to "slog" through some challenging material, but in the end it will be worth it.

I'm very glad I read "It is Well".  Thank you to Crossway books and the Together for the Gospel conference 2010 for giving it to me!  I would highly recommend this one to pastors and deacons/elders of congregations.  It could also serve as a great study tool for small groups.  5 stars without question or hesitation!
at 10:11 PM