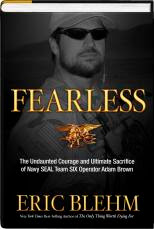 "Fearless" is the biography of an unlikely hero, Adam Brown, who died March 17, 2010 in the Hindu Kush Mountains of Afghanistan when SEAL Team 6 stormed a "hornets nest" hunting a Taliban leader.  In that fire fight, Adam Brown would sustain several gunshot wounds, and his heroic comrades would risk life and limb to try to save their fallen brother.  Sadly, their efforts were unsuccessful.

Author Eric Blehm undertook the endeavor to interview friends, family, and comrades of fallen Adam Brown and write his biography.  Those closest to him described Brown as fearless, a warrior long before he was ever a Navy SEAL.  That description provided the title for Blehm's biography: "Fearless".

Before I say what I didn't like, I'll tell you what I DID like: the last 50 pages.  Not because Adam Brown died; that part was horrible.  In fact, I knew he died before reading the book, but as I read I still expected him to survive, as if the book was able to rewind time.  What I liked was his and his team's heroism.  They each gave all they had, and in the end Adam Brown died courageously.  I liked the last 50 pages becase that's when the pace of the story finally picked up and grew into something captivating.
Quite honestly, when I pick up a book about Navy SEAL's, Delta Force, or Green Beret's, etc, I want to read about their courage under fire, their heroism in those circumstances where 99% of us would buckle.  I want to read about their "super-human" valor, what distinguishes them from me.  I read them because it makes me wonder if I could or would do the same thing in the same situation.  It's what makes men like Adam Brown and his comrades special!  Their stories inspire me to courage, and that's what the final 50 pages gave me.

That said, I thought "Fearless" was relatively boring for the first 15-or-so chapters.  I say "relatively" because I compare it to autobiographies written by former SEAL's Marcus Luttrell ("Lone Survivor"), Howard Wasdin ("SEAL Team 6"), and Chad Williams ("SEAL of God").  Those books were page-turners from the get-go.  Unfortunately, this one wasn't.  Readers have to sift through the preliminaries of Adam's troubled life to get to the action at the end of the book.  I understand why Blehm had to write about Adam's troubles, because they shaped him into who he was as a person, and his personality defined how he would behave as a SEAL.  I don't imagine writing a biography is an easy task, since no story is ever quite as interesting as it is when it's told first-hand.  Second-hand stories just lack emotion and bite.  That's what the first 200 pages gave me.

What I also liked about "Fearless" was the brutal integrity of language.  I thought I'd never see the day when a Christian author writing for a Christian publisher would use curse words in his language.  Blehm interviewed people, and he used their words in their vernacular.  It's not that I need vulgarity and crass language in order to like a book, but it takes away from a book's (or movie's) reality when authors change hard-hitting phrases into powder-puff language, like, "Gol darnit all" or "Hey, you turkey."  It's just not the real world, and Blehm scored big points with me for not editing the words -- albeit crass -- Adam Brown's loved-ones used.

I can't read a book like this and walk away from it unchanged.
I can't help but ask myself, "Could I have achieved what Adam Brown (or other SEAL's) achieved?"  "Would I have responded similarly in the hostile situations they face on a daily basis?"
"How will I react under fire in my duties as a police officer?"
"How will others describe me at my funeral?  Courageous? or Coward?  Man of God? or Man of Compromise?"

If not for the conclusion, "Fearless" would have been floppy.  I give Blehm kudos for wrapping the book up well and instilling much-needed emotion into its conclusion.  Sadly, I wanted to skim throught the first 80% of it to get to what the book was really about.  Therefore, I give this one only 3 1/2 stars.  It wasn't horrible, but it wasn't in the "great" category either.  Adam Brown's life-story was tremendously victorious; the book simply lacked a great beginning and middle.