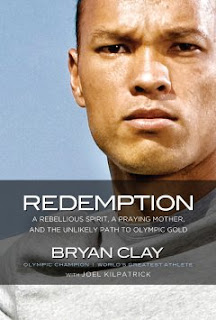 "Redemption" is the auto-biography of US decathlon olympian Brian Clay.  The timing for release of the book is good, with the rapid approach of the 2012 Olympics in London, England.  I had never heard of Bryan Clay prior to reading this book, but now I'm excited to cheer him on this year.

But I'll be honest right up front, the book didn't grip my attention.  I found myself quickly skimming through parts that I thought were boring...which was pretty much most of the middle.  Imagine me writing a story about my life.  Exactly.  It's not really all that stand-out interesting.  I have a few highlights, but all-in-all, my life is pretty normal.  Clay's life doesn't seem too far outside of ordinary either to provide for a compelling autobiography.  He could have spent a chapter or two on "where I came from" and focused the bulk of his efforts on a different approach.

There's obviously much more detail to the story, but that's primarily it.  As I mentioned earlier, I would have liked less detail about Clay's roots, simply because his beginnings are quite within the range of normalcy and not really interesting.  The end of the book, where he only used a couple chapters to describe the connection of his tremendous athleticism, competitiveness, and success with Jesus, could have been the longer portion.  I'm sure he didn't want to be too "preachy", but this actually turned out to be the best part of the book, to be honest with you.

For example, Clay addressed the similarities between the preparation and running for our spiritual race with the preparation and running of a physical one.  He spoke of the mental preparation, stamina, and strength required to be an elite athlete as well as a committed Christian.  I loved how he tied the two together, and that approach would have been better approach if it served as the bulk of the book.  Christians are always looking for encouragement from high-profile people for how to be faithful to Christ.  This was Clay's opportunity, and I would have liked to see him spend more time on encouraging godliness rather than celebrating his youthful life in sin.

If you're interested in athletics, competition, or track & field, then you'll probably like this book.  The last few chapters were truly the best, when Clay recounts his event-by-event, blow-by-blow progress through the 2008 Olympics.  Unfortunately, I don't think this one will hit the "best seller" list.