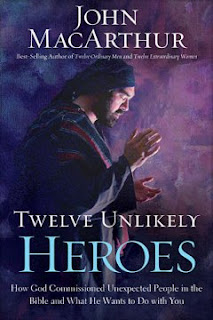 Usually, whenever I see a John MacArthur book up for grabs, I jump at the chance to read-review it. After reading his last 4 books, however, I’m beginning to change my mind. It’s not that Dr. MacArthur isn’t a gifted teacher, speaker, and theologian. It’s simply the case that his books are taking the form of mass-produce for his publisher’s greed. The heavy, heady MacArthur books of old are being replaced by the by the simple, dumbed-down books of today’s Christian culture.

“Twelve Unlikely Heroes” is biblically accurate and safe. But it’s just that: Safe. It didn’t challenge my thinking, my pursuit to conquer sin in my life, or inspire me to greatness. Instead, it served more like a commentary of 12 bible heroes. MacArthur spent a lot of time in each story simply retelling it in a different way than what the bible has already told. He explained a few things that make a few portions of some stories a bit more understandable, but nothing drastic.

LIKES: I’ll likely continue reading future Dr. MacArthur books because his theology and application is trustworthy. One of the things I liked about “Twelve Unlikely Heroes” is that he didn’t choose only male heroes, but included 2 females as well – Miriam and Esther. We often forget to include our ladies in these epic adventures, relegating them to the sidelines in thought that only men can be influential in God’s kingdom.

MacArthur inspired me to slow down when I read these all-too-familiar accounts. The majority of us have heard most of these stories in Sunday school. Unfortunately, the simple teaching in those settings causes most of us to glaze over the details each time we read them. Instead, it would be good to slow down and excavate deeper into the story to understand its immediate intent as well as its global one.

DISLIKES: Dr. MacArthur, you didn’t challenge me in this one – neither my brain nor my spirit. I hate to say it, but if I picked up this book and the spine didn’t contain the author’s name, I would have thought a less-experienced person had written it. It came across as a lazy attempt to quickly put together a book for the publisher. Sorry, Dr. MacArthur. I just think you can do better.

RECOMMENDATIONS: I think this book would be good for a new believer, or even someone who doesn’t grasp the big-picture story of the bible very well. It reads at a high-school level, so it would even be a good study for student groups.

I would like to see fewer books published with MacArthur’s name. Not because I don’t like or trust his teaching, but because I would like the ones he publishes to contain more substance and quality. There are some authors who just shouldn’t be writing books. MacArthur is not one of them. But his books are kind of like Aerosmith songs; they keep getting released, but they fail to inspire.

CONCLUSION: I appreciate the idea behind the book. As mentioned in the epilogue, “the Lord does not limit his kingdom work to one kind of person.” One doesn’t need to be one of God’s star performers, just one of His faithful. That point was clear.

RATING: Although I appreciate MacArthur’s direct way of speaking/teaching, I honestly cannot give this one more than 2 ½ stars.