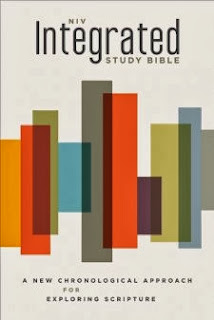 The NIV Integrated Study Bible is a "chronological approach for exploring scripture."  The cover says its a "new" approach, but there's nothing all that new about chronology, to be honest.  There are several chronological bibles available.  This one just happens to have a few different features.  Before I continue, I recognize the deep study and great undertaking that was this chronological project.  The editor and his team certainly put in many hours of planning and organizing to pull it off.  Kudos in that regard, but I'd like to talk about what matters.

The most prominent feature of this bible, to be honest, is its confusing layout.  While the bulk of the pages are formatted like a typical story book -- where sentences run the full width of the page rather than each page being divided into two columns -- many are not so.  Pages that veer away from the full-page layout are cut into halves or even quarters with comparative passages.  It's confusing, so I'll try to explain further.

Take, for instance, the Genesis account.  The first 45 chapters are pretty much the same as you'd find in any traditional bible, but with a splash or two from this or that other biblical book in the mix.  When we get to chapter 46, however, it gets a bit hairy.  There, the page is sub-sub-divided into 4 parallel passages side-by-side.  One column is Genesis 46:8b-12a, while the next column contains Exodus 6:14b-16 and Genesis 38:1-7.  Still another column, which stretches over to the next page, by the way, hosts several passages from Number, and still one remaining column bears several First Chronicles passages.

These divisions are due to the fact that the editor is trying to keep similar stories and accounts grouped together.  But rather than being smooth transitions, they are jumpy and confusing.  I wonder if a bible like this would be better suited to combine all the accounts into a singular narrative, while providing all the biblical cross references and addresses somewhere in the vicinity.

Due to the chronological layout, this bible is not one that you'd want to take with you to a bible study or worship gathering.  When the teacher says, "Turn to First Corinthians 13", you'd have a heck of a time finding it if you were searching based on traditional layouts.  You wouldn't even find other books (like Ezra, for instance) in what is typically considered the "Old Testament".  Instead, you'd find it in about the same place you'd typically look for Romans or so.

One feature I liked about the Integrated Study bible is the timeline on the bottom of each page that runs the entirety of the bible.  The timeline gives the reader a clear snapshot of the time in history the passage s/he is likely originated.

I also liked the fact that this bible contains no editorial comment about what the given passages mean.  So, technically, this is not a true study bible containing cross references or editorial interpretations.  Instead, this bible has only a few translations on the bottom of the pages.

The back pages of this bible contain a Scripture Index...but again, this is due to the confusing layout of chronology.  The index lists the books of the bible in normal order, but contains "addresses" and their associated page number locations.  These references are color coded with gray and black.  Gray type indicates the passage is a conceptual parallel to that which is black type.

Who's going to like this bible?  Well, that's a tricky question.  Basically, it's value will be most appreciated by the person looking to read through his/her bible chronologically.  I highly doubt its further usefulness as a bible one would use for study OTHER THAN getting a good snapshot of history's timeline.

So, would I buy it?  Let me put it this way: If I didn't receive it free from Booksneeze (Zondervan Publishers), I wouldn't buy it.  Now that I've perused it, I'm not sure I'd ever use it again...OTHER THAN the neat timeline.  I'm not even sure who I would give this bible as a gift, to be honest.

Disclaimer:  I received this bible free of charge from Booksneeze (with Zondervan Publishers) in exchange for my unbiased review of it.  All opinions are mine and were not forced upon me.