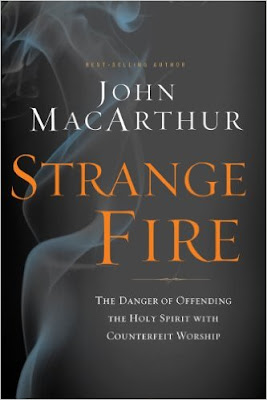 “Strange Fire: The Danger of Offending the Holy Spirit with Counterfeit Worship” is John MacArthur’s sequel of sorts to his 1993 release, “Charismatic Chaos”.  In his standard no-holds-barred approach, Dr. MacArthur confronts the sensationalism and nonsense so often seen in the charismatic movement.  Make no mistake, Dr. MacArthur is no fan of the Charismatic Movement.  In fact, he believes it to be entirely un-biblical.

In short, the book pits “cessationism” (the theological concept that the spiritual gifts we observe in the New Testament have ceased) against “continuationism” (the opposite belief that those gifts continue today).  I won’t attempt to detail the arguments Dr. MacArthur makes AGAINST continuationism and FOR cessationism, for it would be much too lengthy for a blog book review.  If you want that, you'll have to get the book.  Instead, I’ll lay out the book’s format, what I liked and didn’t like, and finish with an observation of a glaring inconsistency.

FORMAT: “Strange Fire” is divided into three parts...
Part 1: “Confronting a Counterfeit Revival”.  In this first part, Dr. MacArthur details the history of the charismatic movement, from its founders to significant events.  I enjoy history, and found this section particularly interesting.  He concludes part one with a 2-part chapter on “Testing the Spirits”, where he argues the illegitimacy of the Charismatic Movement.

Part 2: “Exposing the Counterfeit Gifts”.  In this second part, Dr. MacArthur clearly argues the cessationist stance that the offices of “Apostle” and “Prophet” have ceased, while also punching significant holes in the highly sought-after gifts of “Tongues” and “False Healings”.

Part 3: “Rediscovering the Spirit’s True Work”.  In this third part, Dr. MacArthur discusses greatly details the true work of the Holy Spirit today, including salvation, sanctification, and the empowerment of scripture.  He concludes the book with an open letter – a plea, of sorts – to his “Continuationist Friends” to abandon the false Movement.

LIKES: In a day when people shy away from hard-truth, Dr. MacArthur is anything but bashful.  In fact, he may even be a bit too hard-nosed for the likes of some readers.  But, I don’t think that bothers Dr. MacArthur.  After all, he frequently cited the Old and New Testament admonition that false teachers are placing themselves directly against the Almighty.

Additionally, the book is extremely well researched, as is documented in about 50 pages of references and notes.  The appendix also contains an alphabetical listing of the Church fathers who seem to stand on the side of cessationism, as well as an alphabetic name and event index.  This book could serve as a good resource for further study.

DISLIKES: While Dr. MacArthur aims his attacks against the mainstream Charismatic Movement (p.235), I got the feeling the basis of his attacks are upon the well-deserving charlatans and false teachers of the Movement.  This is certainly necessary, but I came away with the sense that he is lumping all charismatics in with the charlatans.  I have continuationist friends, and they behave nothing like the heretical practitioners seen so frequently on television.  They are God-fearing, God-honoring people who have a certain theological conviction and persuasion.

Another dislike is the notion that here is yet another box into which Christians must fit.  No longer can we simply ask, “Are you ‘Evangelical’ or ‘Catholic’”?...or “Pre-trib, Mid-trib, Post-trib, Non-trib?”…or “Traditional or Contemporary”?...or “Reformed or Free Will?”.  But Dr. MacArthur reminds us there is yet another box: “Are you a Cessationist or a Continuationist”?  I'm growing increasingly tired of the boxes we force ourselves into.

INCONSISTENCY: In the last chapter – the “Open Letter” – Dr. MacArthur says, “…I regard as brothers in Christ and friends in the ministry all who are faithful fellow workmen in the Word and the gospel, even if they give a place of legitimacy to the charismatic experience.”  He continues, “…the Charismatic Movement is teeming with false teachers” (p. 231).  I have two general arguments with statements like these.


First, Dr. MacArthur later wrote, “Whoever compromises with the error and subjectivism of charismatic theology allows the enemy into the camp.”  Using this quote, I’ll cite a point he made in a message he spoke regarding Catholicism – “Are Catholics brothers and sisters in Christ, or are they a legitimate mission field?”  I see the same principle emerging in the earlier statements.  In this case, however, it appears Dr. MacArthur is on the fence.  I would like to ask him, “Are Charismatics a mission field, or are they brothers and sisters in Christ?”  The bulk of his book makes me believe he thinks those who are continuationist-charismatics have swallowed a lie and are doomed to hell.  Yet, he readily admits some of his friends are “brothers in Christ”.  I’d like to know which it is.

The second issue I have with the earlier statements is this: simply because a certain Movement or tradition is "teeming with false teachers" doesn't render the movement false.  False teachers can be found in every theological persuasion -- from Baptist, pre-trib, cessationism, to Free Methodist, post-trib, continuationist. See what happens when we lump people into boxes?

RATING:  Overall, I give "Strange Fire" 4 1/2 out of 5 stars.  It was well worth my time reading, even if I disagreed with some points.  It was well explained and well researched.  MacArthur disciples will want this one for their bookshelf.

DISCLAIMER: I received this book free of charge from Booksneeze (Nelson Books) in exchange for my unbiased review of it.  All opinions are mine and were not forced upon me to write a positive review.