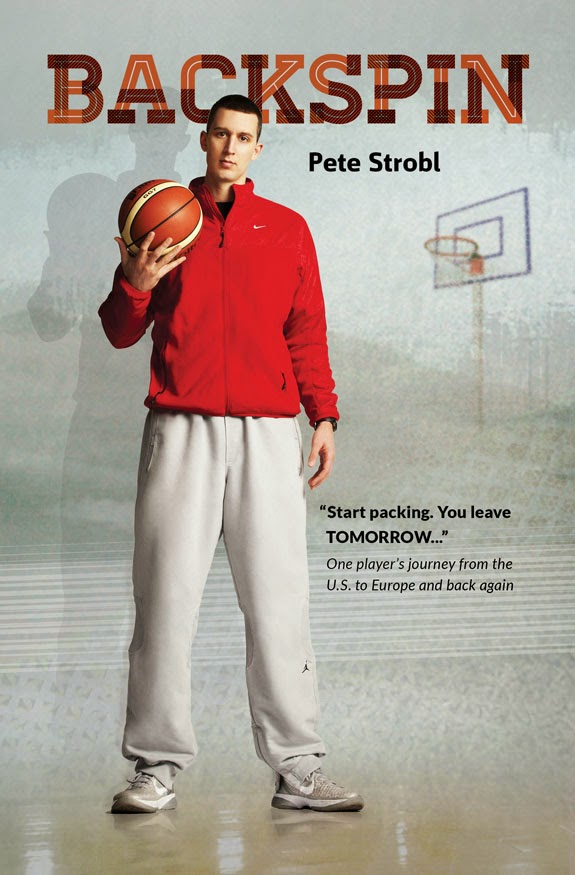 "Backspin" is the serious-humorous autobiography of a former professional basketball player in the European leagues, Pete Strobl. Pete played college ball at Niagara University, and went on to play nine seasons professionally in European leagues.  He founded (and now coaches youngsters at) The Scoring Factory, a basketball skills camp in Pittsburgh, PA.

The book's title comes from Pete's telling of his many experiences and what those same experiences taught him.  At strategic points in the book, Pete pauses his story-telling to tell "the story behind the story", which he aptly titles, "backspin".  These shorter "backspins" are often comprised of little lessons he experienced, but may not have recognized until later.  Pete is a marvelous story teller, and his wit made me laugh and think often as I read through it.

Thoughtful people -- I think -- don't simply want to tell interesting stories. Instead, they want those stories to have meaning and inspiration for others.  Because this book made me think about several priceless lessons, I'd like to tell you about just three reflections I took away from this book.  (I'll let you read Pete's interesting stories for yourself in his own words.)

REFLECTION #1: As much as Pete Strobl longed to make it to the "bigs" (aka "NBA") -- just as many athletes hope -- he never quite made it there.  Yet, I got the feeling while reading the book that maybe Pete's purpose in life wasn't to be a big name on NBA TV.  He has a heart for teaching, and eventually that door opened for him.  While he enjoyed playing ball, he also wanted to coach one day.  He explained in the chapter entitled, "Keeping an Open Mind", that he didn't expect to become a coach as soon as he did. Often, we can be disappointed when we do not attain our life goals, but it's only when we approach minor setbacks with an open mind that we find success and joy.

I'm reminded of the old phrase, "The best laid plans of mice and men often go awry."  As a Christian, I attempt to look at life and its setbacks and successes in view of God's design.  We may make plans, but God orchestrates the music.  We may think we will enjoy a particular pursuit, but it many times God uses those setbacks and disappointments to lead us to a later realization of satisfaction and success.  Pete explained that while he didn't expect to become a coach so soon, he also didn't expect to enjoy it so much.

Lesson #1 - Don't beat yourself up if you don't realize a dream. Maybe something better is waiting for you.

REFLECTION #2: Another interesting thought came with Pete's telling of our perception of "role players". On page 197, Pete writes, "There are role players or accompanists in both music and basketball...Role players sometimes go unnoticed, but are often the difference between a hit record or not."  He tells the story of a bassist who just does his job; he's nobody special, and he's definitely not the front-man. Yet, he is so vital to the music that for some reason a lot of the great hits seem to have his name in the credits. Yet, he may not receive accolades for his great success in supporting other musicians.

The same is true with team sports, Strobl says, and I'd even suggest is true with life in general.  Most of us long to see our name in lights, or to speak in front of thousands, or to have our name recognized as a household name.  But it is often the case that those who are making some of the greatest impact in others lives are those whose names barely peak out from within the shadows.  I think about my own life and all the things I hope to accomplish. More importantly, however, is what I'm doing with what abilities I have where I am now.  Am I striving for fame? Or do I long to make an impact in peoples' lives?  I think this is the point Pete is attempting to make.  If not, that's what I took away from it.

Lesson #2 - What do you really want in life?  Fading fame, or the ability to impact people?

REFLECTION #3: Finally, Pete told a story about a time when he was a youngster going to the arena to watch a young basketball star named Michael Jordan.  "Now that I was coaching younger kids, I thought more than ever about the indelible impression adults can make on kids.  A lot of long hours and hard work on Michael Jordan's part went into making that a memorable night for an arena full of fans.  And with all of that attention comes a responsibility...I vowed to take coaching just as seriously as I did playing" (pp. 267-268).

What are we teaching our children?  What are we teaching others' children?  How we treat these young people speaks volumes into their lives about what they perceive they mean to us.  Influential people have the power to turn a troubled youth into a successful leader, or to break a once-great kid down to a lonesome soul.  I am saddened when I consider all the times I've failed my own children in this manner.

Pete continues a similar thought in the book's conclusion: "They also say that the best way to really master something you love is to teach it to someone else" (p.327).  I have the feeling that Pete will not only be teaching basketball skills into youngsters' lives, but will be speaking wisdom, courage, and discipline into their lives as well.

Lesson #3 - You are always teaching something to others.  Will you be mindful about what it is you're teaching them?

CONCLUSION: There were a lot of stories in this book, and while I got confused a couple times in the midst of Pete's ever-changing "scenery" as he bounced around the European league, I still found it thought-provoking and enjoyable at the same time.  I thought the telling of the many stories lent value to the lessons he would project through them.  I highly recommend this book for basketball fans and athletes alike.  The lessons are well worth the read.

Coach Pete Strobl can be reached though his website, CoachStrobl.com.

RATING: I give "Backspin" 4 out of 5 stars.  It was an enjoyable book, but not one that I thought, "Man, I just can't set this one down."  There were also a few spelling mistakes that I was surprised the editor didn't catch, but they in no way distracted me away from the stories themselves.

DISCLAIMER: I received this book free of charge from the author in exchange for an unbiased review.  I was not obligated to provide a positive review of it; all opinions expressed are mine.
at 6:32 PM