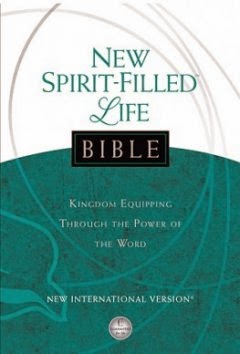 I received “The New Spirit Filled Life Study Bible, New International Version" from Thomas Nelson Publishers for review.  I previously reviewed the same Bible in the New King James and New Living Translation/Version, and have many of the same opinions about the NIV as I do about the NKJV and NLT.

CROSS-REFERENCES:
I formerly used a study bible that contained cross-references in the sub-headings of each chapter.  For instance, if the parable of the sower was named in Matthew 13, it also provided the “address” to see the passage at Mark 4, and conversely.  This study Bible does not have this feature.  There are still margin and footnote cross-references (in smaller print, of course), but not the quick cross-referencing that I was used to.

COLOR SCHEMES:
I am not a fan of the color scheme in the NIV Bible compared to the color scheme of the NLT Bible.  The NKJV employed a blue/gray hue, while the NLT employs a maroon/black hue.  The NIV, however, is comprised of its notes sections in two shades of pink for "Word Wealth" and "Truth in Action" sections, and gray in "Kingdom Dynamics" sections.  As a man, I honestly am not sure I'd want to be seen in a public place reading a pink-tinted book.  You may call it trivial, but it's just the way it is.  This kind of stuff matters to guys.  So, the ladies might appreciate the color schemes of this version.

The following headings contain similar opinions as were written for the NKJV and NLT:

WORD WEALTH:
Each book contains several Word Wealth insets.  These are small boxes that pertain to particular words in the text that the editors believed would be helpful.  What is great is that these boxes are not filled with an author’s personal opinions, or how a particular denomination believes.  Instead, words are lightly dissected in their Hebrew or Greek usage.  This feature does some of the legwork for those times when you wish you had an exhaustive concordance handy.

KINGDOM DYNAMICS:
Another similar inset box contained within the text is this Kingdom Dynamics feature.  This box contains information for how the text applies to the Kingdom of God, what the first hearers/believers were experiencing, etc.  It provides a more detailed commentary about an important theme in the passage.  This commentary is slightly different from those “bottom-of-the-page” commentaries where a particular author tells you what s/he believes about, let’s say, the “rapture” for example.

COMMENTARY:
So naturally, this brings me to the next point: commentaries.  Have you ever read a study Bible by so-and-so and you wished s/he would leave personal or debatable opinions out of it?  That’s been done in this Bible.  Since there are so many contributors to this Bible, it is highly unlikely they all believed the same things on those debatable issues.  And those opinions have been omitted from the commentaries.  So if you’re looking for someone to tell you what to believe at all turns, this isn’t the Bible for you.

VERSE DIVISIONS:
This version makes the reading more readable than the NKJV.  Where the NKJV chopped each verse into a new line, the NIV is written more in paragraph form.  For example, if you’re reading Acts 1:10-11 in the NKJV, it looks like this:

10 And while they looked steadfastly toward heaven as He went up, behold, two men stood by them in white apparel,
11 who also said…

I don’t like it that way because it’s choppy.  Do you remember your high school or college literature class where you were required to read a poem aloud?  I know you didn’t do this, but as you listened to your classmates read the poem line by line, you and everyone else could tell when one line concluded and the next began.  It sounded choppy rather than “flowy”.  That’s what this broken-verse format does in this Bible, so I’ll just come out and say it: I hate this feature.  Although I’m relatively certain the editors’ rationale was to make each verse easier to find in rapid searches, I’m positively against chopping up paragraphs like this.  ‘Nuff said.

But the NIV reads more like how a person would expect literature to appear.

TRUTH-IN-ACTION:
This section completes each book.  Numerical references throughout the Biblical text may point the reader to one or more of these points.  The Truth section briefly explains the history behind the passage’s theme.  The Action section describes what the Holy Spirit intends for us to do with the given theme or information in the text.  It’s brilliant!  For what good is reading the Bible if we don’t also make life application?

RATING & RECOMMENDATION:
I give the NIV 3 1/2 stars.  I'm not much of a fan of the NIV translation itself, nor am I a fan of the pink tint, but all that said, this one is still a good study Bible...especially for those who like pink :-)  You'll have to decide whether you like NIV, NLT, or NKJV reading.  In any case, you won't be disappointed.

DISCLAIMER: I received this Bible free of charge from Thomas Nelson Publishers (Book Look Bloggers) in exchange for my unbiased review.  All opinions are mine.  I was not threatened or coerced in any way to provide a positive review.
at 7:03 PM