In Defense of Life: 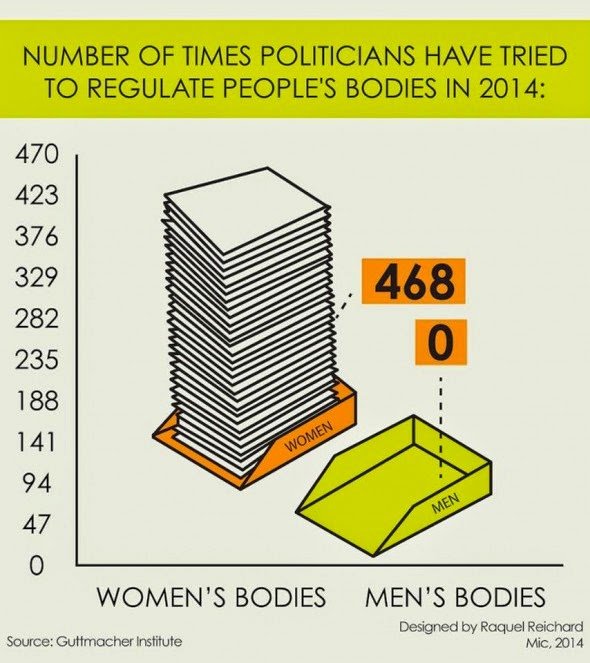 Veiled behind a plea for equality in "reproductive health" is a chart showing the disparity in regulation of womens' bodies compared to mens'.  The title of Julianne Ross's recent article, "One Troubling Chart Shows How Many Times Politicians Regulated Men and Women's Bodies in 2014", is misleading enough, let alone the fact that her -- and her position's -- arguments hold little water.

As Ross would admit later in the body of her article, legislators have only attempted such regulation (which I'll address in a moment) 468 times.  Legislation that has actually passed, however, is a whopping 21 "restrictions" (as she calls them) across 13 states.  Even if someone wanted to suggest 21:0 women:men reproductive health legislation ratio is astronomically askew, they would do well to admit why legislation is proposed in the first place: women are capable of carrying life inside them; men are not.  Period.

The pro-life position is not so much interested in legislating what women can and cannot do in the privacy of their own homes with the sexual partners of their choice and in the manner of their choosing.  Those are different arguments altogether.  Instead, the pro-life position is ultimately concerned with the life of the unborn child -- a person who has no ability to protect herself.  Her defenders are those who care enough to stand up against the atrocities committed against her and her unborn brothers and sisters.  Her defenders will face the ire of those who wish to silence her forever, who say he is merely attempting to "restrict" a woman's "reproductive health".

To show the shallowness of their position, Ross quotes pro-choice advocate and Senator, Nina Turner (D-Ohio), as saying, "If [representatives] want to make intimately personal decisions about women’s lives and their anatomy, I strongly urge them to go to medical school. But until then, stay out of a woman’s womb!”  But let's clarify what her words mean: Only doctors are capable of deciding the fate of the unborn.  Only doctors can save or take life.

Applying the Senator's logic to other examples, one might conclude that only those who are capable of defending the lives of their fellow American citizens are soldiers and police officers.  Yet, many non-uniformed heroes walk our streets every day.  If it is doctors who must be relied upon to protect the lives of those in the womb, why are many of those doctors killing instead?  Therefore, it seems apparent that we absolutely must rely upon non-medical voices to defend the unborn.

I don't want to spend the remainder of my space commenting on the foolish positions and bills six female legislators presented to Congress, which Ross briefly discussed.  You can read for yourself how their attempts don't meet the same threshold as that of defending human life.  Instead, I'd rather address the real issue at hand, and conclude with a word or two of encouragement.

The real issue at hand is not one of flesh-and-blood.  It is one more diabolical than that.  Here it is: Satan hates Jesus Christ, and will do whatever he can to attack anything that gets him closest to the heart of God.  Therefore, he assaults the unborn with weapons of twisted logic, using catch-phrases like "reproductive health" to cover up abortion; he invades marriage, the very picture of Christ's relationship with his redeemed people -- the Church; he besieges sexuality, convincing us that the consequences of sex outside of God's design are not really that harmful.  I could continue, but my intent is that we recognize the war for life is being waged on a supernatural scale, but fought on a human battlefield.


It is not my intent to condemn anyone who has faced or is facing a crisis pregnancy.  I'm willing to bet we all know someone who is or has been there, whether we know it or not.  The sheer numbers speak loudly.  However, there is hope in Jesus Christ. You are fighting the guilt that has overcome you because of your sinful choices; you've carried out plans that were harmful to you or others; you cry yourself to sleep at night because of your shame.  I think we've all been there a time or two.  But Jesus Christ said, "I have not come to condemn the world, but to save the world, to give life!"  That's a far cry from the Devil's purpose: steal, kill, and destroy, and I'd say he's been doing all three quite well for a long time.

You don't have to live the rest of your days in guilt and shame.  You can have renewed life, and you can have it now.  And that is the reason we aim to defend all of life.
at 8:19 PM