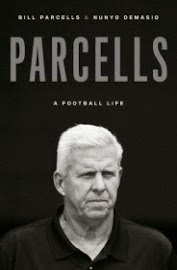 I grew up watching one of the all-time best linebackers in NFL history: number "56" -- Lawrence Taylor -- of the New York football Giants.  And I remember watching as the imposing figure on the sidelines, whose coaching style was nothing short of driven to win: Bill Parcells.

This book takes the reader on a journey from the early days of Bill's childhood -- where he was raised by a tough father -- to his induction into the NFL Hall of Fame. Because it is difficult to sum up a 500+ page biography in a short blog book review, I will hit on a few points that inspired my thinking.

THE INFLUENCE OF A FATHER: There are many reasons why fathers' influence over our sons' lives are crucial.  For instance, who we are as fathers/men and how we treat our children and wives cause our children to view our Heavenly Father in much the same ways as they view us.  Are they afraid of us, or do they find comfort in our presence?  Are we lazy, or are we driven?

Who Bill Parcells was as a coach, and who he is as a man, is the direct result of his father's strong influence on him.  The two men pulled no punches; they knew what was necessary to be successful; and they were driven to accomplish their goals.  Many of the stories told in the book regarding Bill's coaching tenure returned to the influence his own father had on him.  Fatherhood is no small task!

BEING TOUGH, BUT RESPECTABLE: I think we humans tend to equate a coach (or a supervisor) being "tough" with his/her employees to being a jerk.  Likewise, we may also be tempted to equate "respectable" to being liked or nice.  But that isn't necessarily so.

Bill was known for his tough-on-drugs approach to football, and his influence on his teams is what inspired the NFL to pursue substance abuse policies.  In his system, drug users and winners did not mix.  Personnel may not have liked Bill Parcells during those tough conversations, but afterward they came out on the other side as human beings.  I got the feeling after reading the book they all appreciated those hard conversations, too.

STRONG LEADERSHIP:  Crummy teams that start at the bottom in one season and finish at the top just a few seasons later always seem to be coached by strong leaders. I've often wondered how influential coaching staffs really are, as I considered my favorite team's mediocre season with mediocre players and coaches and the possibility of them being turned around with the same players but different coaches.  I think Parcells answers that question, because Bill was able to make winners out of non-winners.

Strong leaders in those scenarios pull no punches.  Employees know exactly what they're getting because strong leaders are consistently strong, rather than wishy-washy.  Employees may not like to hang around that kind of supervisor, but it begs the question: Is it a supervisor's job to be an employee's friend, or to make them and the organization better?

CONCLUSION: Once again, this is certainly NOT all that this book is about.  There is so much more.  You'll have to read this monster volume for yourself the glean what you will from it.

RATING: This book was very well researched and documented, and brilliantly intertwined biographical information with sporting replay.  If you're a sports fan, this book is for you...it has all the who's-who you could ever hope for in a biography.  It's a no-brainer: I give this 5 stars out of 5!

DISCLAIMER: I received this book free of charge from Blogging for Books in exchange for my unbiased review.  All opinions are mine; they were not forced upon me.  I was not promised anything in exchange for a positive review.
at 9:36 PM