Build a Load-Bearing Bridge with Popsicle Sticks and Tongue Depressors: 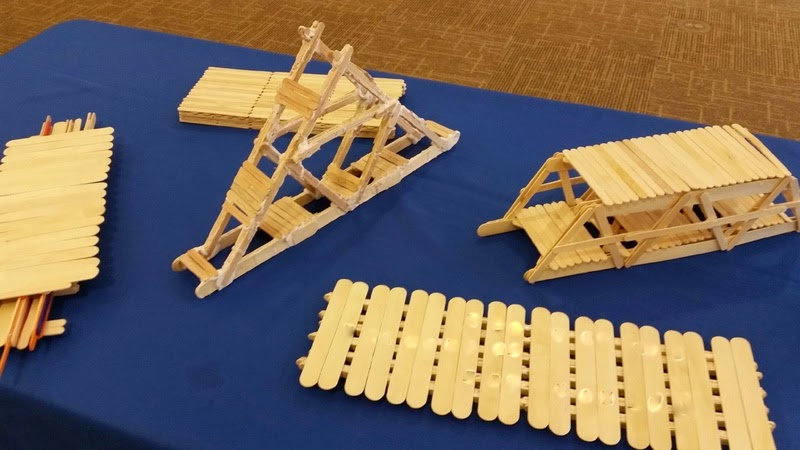 Like us, you've Googled the "How to's" for building one of those wooden load-bearing bridges out of popsicle sticks and/or tongue depressors.  Maybe you've decided to try a free-time experiment, or, like us, your student is participating in a Science Olympiad competition.

Long story short, our son was told THE DAY BEFORE the competition that he could participate in the bridge building portion. We were given a bag containing 100 popsicle sticks and 20 tongue depressors, we could use only glue to attach them, and the bridge had to span 1 foot of distance. Not cry-babying here, but while the other students had several weeks to build sturdy bridges, we had only about 18 hours. That's why I share this...in the end, the quick design we devised ultimately held approximately 150 pounds and didn't break!  Here's what we did.

We decided to design the bridge with a truss system of layers of staggered sticks.  Each truss consisted of 4 layers of sticks set on top of each other at differing (thirds) intervals.  If you can zoom in on this picture, you'll see we "striped" lines across the face of the sticks, dividing each stick into thirds. Rather than overlaying the sticks in halves (imagine a cinder block wall), we decided to overlay them in thirds so that if one stick gave out under a load, there was another immediately below it to help support it. 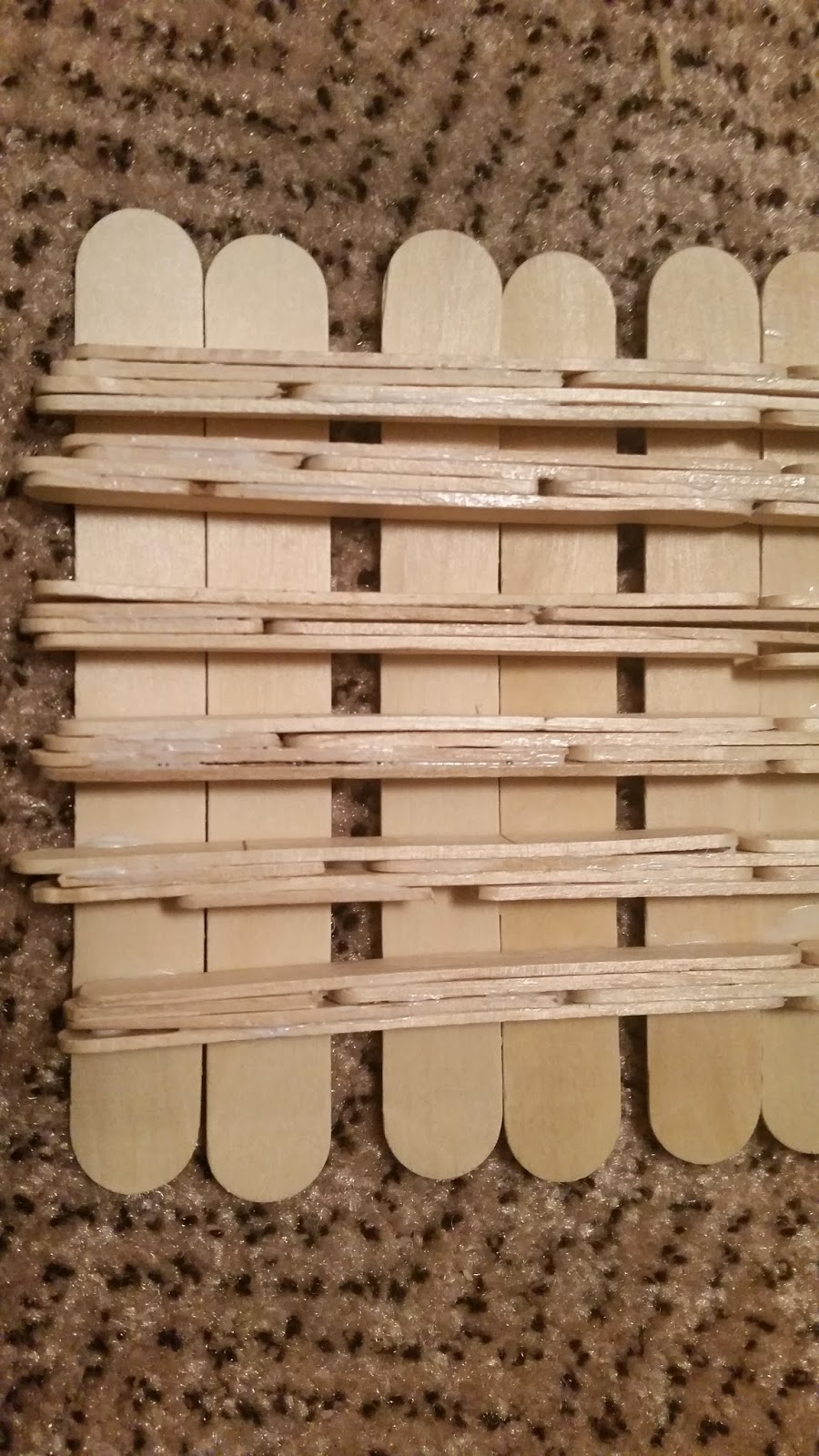 The picture above gives you an idea of how we staggered the layers of each truss. When layering in thirds (just like in halves), some of the "thirds" had to be cut so that each layer of the truss would start and end in line (well, approximately). 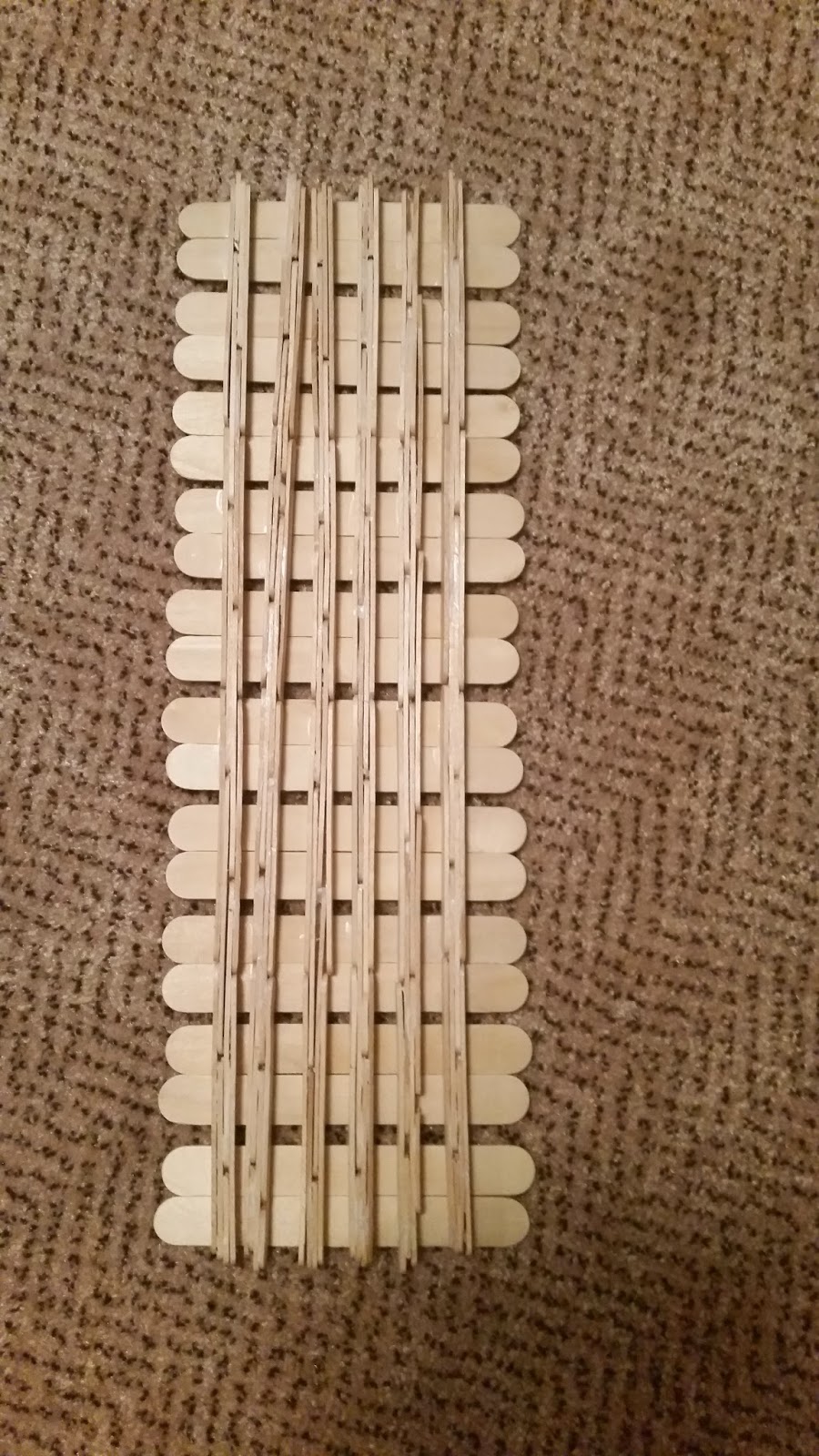 In total, we made 6 trusses that stretched approximately 15 inches, and each truss consisted of approximately 16 popsicle sticks (the top and bottom layers were exactly 4 sticks long).  While the glue was setting, but not completely dry, we overlayed what would be the top of the bridge with the thick tongue depressors.  Their purpose wasn't to provide strength (since they laid flat, rather than vertical), but to connect the trusses together and hold them in place.  We crossed our fingers as we allowed the glue to harden overnight.  We weren't confident, and even prepared our son for the possibility (probability, even) that his bridge would probably crumble under even the lightest weight.  But... 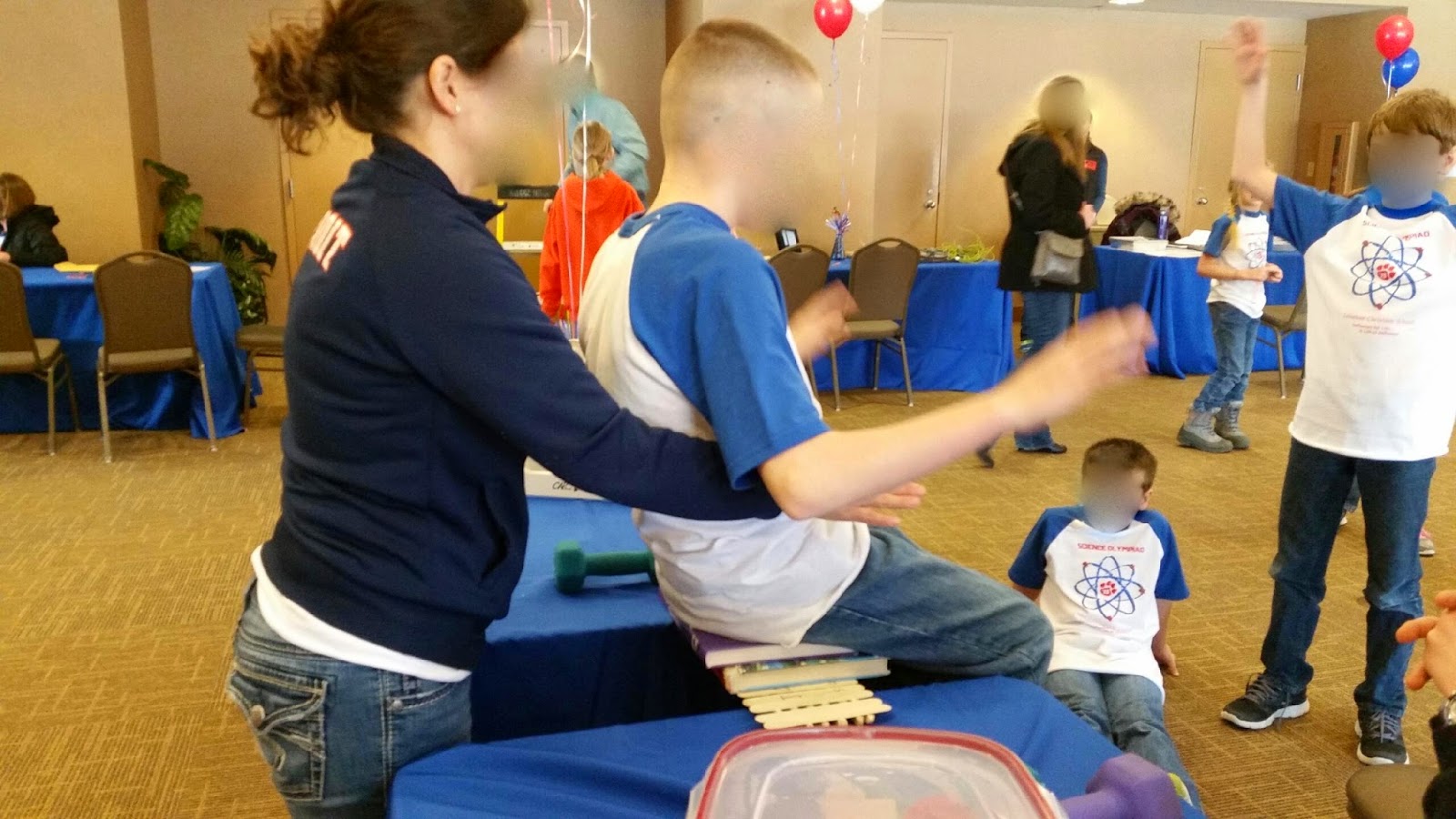 After holding approximately 30-or-so pounds, the teacher decided to have a boy sit on the bridge.  When it didn't break, my son sat on his friend's lap.  As the two sat on it together, the bridge STILL didn't collapse! Around the 150-pound mark, this design finally started to bow, but still didn't break.  They stopped the competition when one girl's design didn't even begin to show signs of weakness at the 150-pound mark.  The below design was her's. 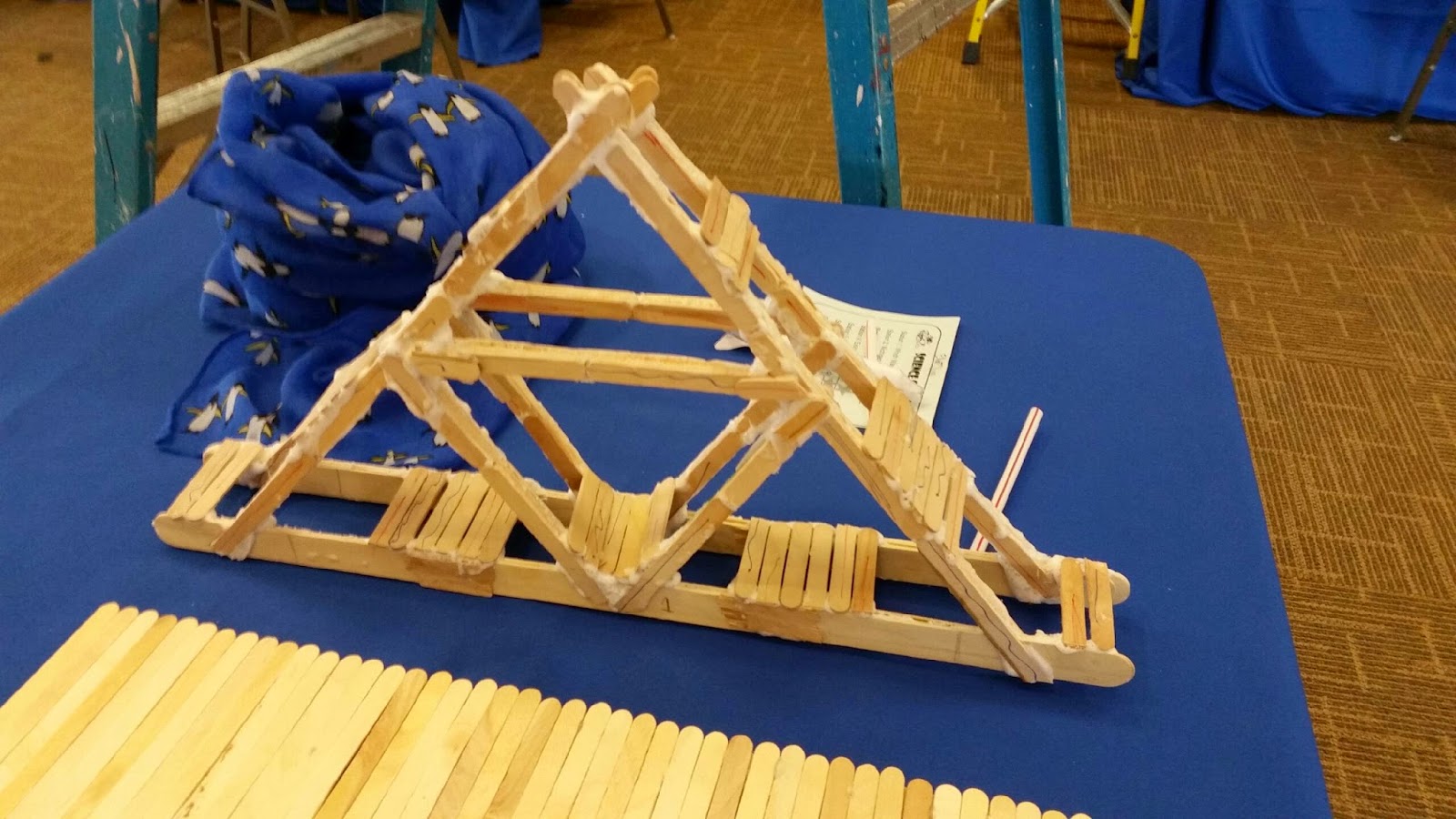 Great job, kids!  What would be a competition without also teaching some invaluable life lessons?  Here's what we helped teach our son.

First, life sometimes gives us lemons (like being told to build something or complete a task in a relatively short time).  But when handed lemons, make lemonade.  In other words, do the best you can with what you've been given.  That's real life, folks!  How many times do we have an agenda for our work day, but our supervisor says to us at the last minute, "Hey, I need this done ASAP!"  So what do responsible people do?  Cry? Whine?  No, we get to work and do the best we can.

Second, this bridge was a direct result of teamwork, and not any one person's ideas.  Our son, my wife, and I all had good ideas about how to build the sturdiest bridge in the shortest amount of time, but we had to acknowledge when someone else's ideas were better than our own.  Due to time constraints, we didn't have days or weeks to debate or research our ideas.  Instead, we had to make decisions and put them into action.

Finally, our son loves science, but is not so fond of math.  We've been trying to show him how math comes into play in all fields of science.  Here, we helped him see the value of thirds and how they work together to even build bridges.  We connected the boring-ness of theoretical math with the exciting fun-ness of science.

CONCLUSION: I hope this is helpful to you in your bridge-building adventure.  So, have fun, keep calm, and build on!
at 7:57 AM