LIFE ON THE EDGE: THE COMING OF AGE OF QUANTUM BIOLOGY" by JohnJoe McFadden and Jim Al-Khalili (book review) 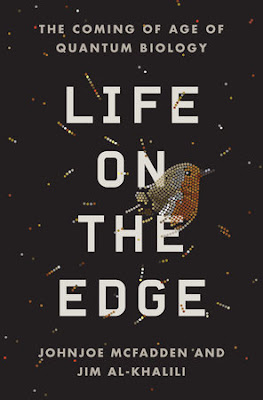 How did life begin?  How did we get here from there?  How do physical brains engage in nonphysical thought?  What part does quantum biology play in these questions?

These are the underlying themes in “Life on the Edge”, where co-authors Johnjoe McFadden and Jim Al-Khalili attempt to provide scientific answers.  I’ll be honest with you at the outset: I’m not a scientist.  I don't claim to have answers to life's toughest questions.  Science merely fascinates me.  I also do not think the authors claim to have all the answers either.  That said, I read this book from cover to cover from a “Creationist” perspective, yet I’m willing to read/entertain scientific ideas that might refine my understanding of life better than I understand it now…even if those ideas disagree with mine.

McFadden and Al-Khalili make it clear early in the book that they believe origin-of-life questions are meant for science to answer, writing, “Have we overlooked some vital spark that animates the living and is absent from the nonliving? This is not to say we will be claiming that any kind of vital force, spirit, or magic ingredient animates life. Our story is much more interesting than that” (p.27).  In other words, religion cannot answer the question, but only science can.

I find it ironic that those who believe in Creationism, according to McFadden and Al-Khalili, possess “uninteresting” views (based on their statement) of the origin of life.  Yet, they hope their readers will simply accept the theory that life emerged when “something much simpler than a bacterium” (p.315) over the course of MILLIONS of years, like a lightning-infused blob of primordial soup, somehow created the living from the nonliving.  Apparently, a Creator devising and speaking life into existence is far less interesting (and less possible) than bacteria emerging from volcanic mud.  They claim, “No serious scientist today doubts that life can be accounted for within the sphere of science” (p.101).  Based on their rationale, scientists are not serious if they introduce a Creator into the equation.

Creationists ask, How did something come from nothing, life from non-life?  Written in the book’s front dust cover is a concept covered more in-depth within the book: “Even in an age of cloning and artificial biology, the remarkable truth remains: Nobody has ever made anything living entirely out of dead material. Life remains the only way to make life.”

Scientists have endeavored to create life, and I am discouraged that after all of their efforts they are not only reluctant, but afraid, to acknowledge a Creator.  After all, scientists admit nobody has ever been able to CREATE life from dead material, but have “managed only to modify an existing life form” (p.41 and 313).  Elsewhere, McFadden and Al-Khalili admit, “Thermodynamic forces…tend to destroy order rather than create it.  You throw a chicken into the pot, heat it up and stir it, and make chicken soup.  No one has ever poured a can of soup into a pot and made a chicken” (p.275).  They argue that life began not merely with “gunk”, as they call it, but with self-replicating DNA, RNA, etc.  Yet the problem remains: how did the living come from the non-living?  I found their theories weak.

Elsewhere, while discussing “high-fidelity copying” as being crucial for life, McFadden and Al-Khalili cite an example of ancient manuscript writers copying texts before the advent of the printing press.  “The rate of copying errors in DNA replication, what we call mutations, is usually less than one in a billion” (p.202).  Then they ask readers to imagine human beings attempting to faithfully copy one thousand large books in a library.  “How many errors do you think you would make?”  They suggest the texts would be “riddled with errors” (p.202).

Yet, just a few short pages later the authors write, “Life couldn’t have evolved on our planet and adapted to its many challenges if the process of copying the genetic code was always perfect” (p.207).  It is convenient that when they want to discredit ancient texts (the Bible, maybe?) they point to potential error rates.  Yet when considering origin-of-life questions, error rates are suddenly not only ACCEPTABLE, but are NECESSARY to sustain the evolution of life.  It seems disingenuous to have it both ways.

An article written in LiveScience.com reads, “When parents pass their genes down to their children, an average of 60 errors are introduced to the genetic code in the process”.  That would mean each person alive contains errant DNA.  But the success rate of copying each DNA molecule (much like copying each letter within a book) reveals the respective error rates between books and DNA a little more comparable.

I’ll close with their quote of Sir Fred Hoyle: “The probability of random chemical processes coming together to generate life…was as likely as a tornado blowing through a junkyard and assembling a jumbo jet by chance.  …cellular life…is just too complex and organized to have arisen by chance alone…” (p.275).  I concur!  But at least McFadden and Al-Khalili agree that life is the product of an equation requiring more than time plus matter plus chance.  May I suggest a Creator?  No, probably not.  That said, I think the authors actually provided a lot of support for Creationism!

There are many other issues (both good and bad) within Life on the Edge that are worthy of intelligent discussion.  I was challenged throughout the book to think critically, so that is a successful book, in my view.
I give the book 3.5 out of 5 stars.  If you’re into science, you’ll likely enjoy it and be challenged by it.  If science is not within your scope of interest, pass on it, for it is heavy with difficult concepts.  Nevertheless, the authors did a good job trying to simplify these challenges for the average reader.


DISCLAIMER: I received this book free of charge from “Blogging for Books” in exchange for my unbiased review of it.  All opinions are mine, and were not coerced upon me.  I was not encouraged to provide a positive review, nor discouraged from providing a negative review.
at 9:18 PM