The Rise and Fall of Kings: 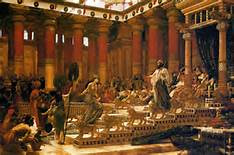 Many years of life are not required to realize that we live in a sin-sickened world.  Eventually, we all fall ill, watch loved-ones die, read of tragic events in the news, and witness various calamities and atrocities.  With our hearts and minds focused on the wrong perspective, life events can allow great fear to settle into our hearts.  But focused rightly, we can find comfort and hope from within the darkness that plagues even our days.

Would you please take just a couple minutes to read First Kings chapter 1?  It has such invaluable treasures waiting to be unearthed.

Summarizing the chapter briefly, King David is about to die, and two half-brothers are vying for his throne: Adonijah and Solomon.  We first see Adonijah setting himself up, convincing a small handful of men of nobility to support his cause.  He throws himself a celebration as a way of making the announcement to the kingdom of his new kingly reign.

But, in another room, a mother and a prophet of God (who is close to King David), remind the king that her son, Solomon, is the rightful heir.  After their short, but pointed, conversation with him King David officially declares Solomon as the heir to his throne. 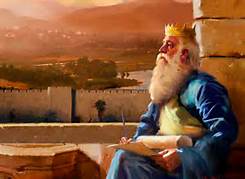 
1) One man (Adonijah) had only the support of a small few in his attempts to establish his reign.  Adonijah's "reign" was not established in any official capacity, but by his own meager attempts.

2) The other man (Solomon) had his reign firmly established by true authority - he had the word of the king and the blessing of God, the King of kings.

3) Nations rise and fall according to God's will and command, for He rules and reigns sovereign over all that He made.  No king, prince, president, or any other authority has EVER risen to power without the express authority of God; nor will it ever happen today or in the future.  No amount of self-proclamation will ever seat a ruler on an earthly "throne"; only those who have been established by God (see Romans 13) will enjoy the brief privilege.

4) As we watch evil leaders rise and fall throughout history, it may be discouraging to some to think God authorizes evil empires.  Make no mistake, history has revealed that God PERMITS the righteous and the wicked to temporarily rule -- both yesterday and today.  But take heart, no empire rises a moment sooner than God allows it to rise.  It shows up on the scene when God, and God alone, says it's time.  Likewise, no kingdom will EVER last a fraction of a second longer than God permits.  Not. One. Second!  Kings, presidents, and princes fall when the Creator says.

5) Given comments 1 through 4, be encouraged that none of what we are witnessing or experiencing today takes God by surprise.  We may not understand the ins-and-outs of the unfolding of events, nor may we have our deepest questions answered.  GOD IS SOVEREIGN OVER ALL!
at 10:27 AM