Darwinism: Unto Ages Past 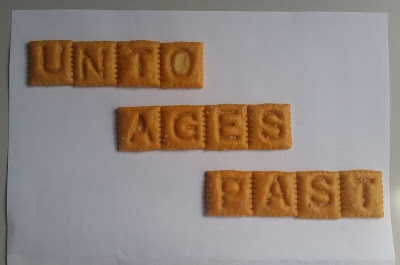 I happened upon a small baggie of cheese-flavored, alphabet crackers in my lunch bag.  When I poured out its contents, I was surprised to read the phrase, “UNTO AGES PAST”.  Right there before me was this simple -- yet complex -- message.

But who wrote it?  And how did the letters, which were all approximately the same sizes, ever become imprinted on those little 1-inch square crackers? Not only did the phrase contain three words, each consisting of four letters, but the crackers’ edges were all neatly aligned, too.  Even the edges looked similar with apparently the same edge designs and dimensions.

Just as the edges were neatly aligned, so were the words, which were approximately evenly spaced one above another, and slightly offset in a simple pattern.  While their alignment was peculiar, I also noticed these three words fit neatly within the 11-inch width of an 8½”x11” sheet of white paper.

I was stunned!  After all, these crackers were NOT in my lunch bag yesterday, since I ate ALL of my lunch 24 hours ago without a crumb to spare.  What an entirely too-short amount of time for these items to all line up into a perfect -- albeit simple -- phrase!  Maybe I could imagine these arrangements happening if about 30-million years had passed since I last ate lunch from this same bag.  But that wasn’t the case!

What if I told you I didn’t pack these crackers in my bag, but that they simply appeared there, rattling around inside this small, clear, plastic zipper-top baggie?  Would you believe me if I told you they never existed prior to me seeing them?  Would you believe me if I told you the bag's zipper-seal even sealed itself?
Of course you wouldn't, because we all know that intelligence doesn't come from non-intelligence, or that something comes from nothing.  I must stop being foolish. We know all these events could not happen the way described above.  It is impossible.  Reason tells us that I (or someone else) would have had to arrange these events, and that they did not just appear that way.

Yet, something akin to this is what we’ve been (and are being) taught duped to believe by educators -- that the matter we see today has organized itself by chance processes of Darwinian evolution. Not only are they suggesting matter has organized itself from chaos, but they even suggest matter simply appeared out of nowhere, as though nothing can create something.

Right now you’re reading a simple blog post containing not just images of letters on a screen, but letters that are organized into intelligible words, which, in-turn, are organized into sentences, paragraphs, and relatively complete thoughts.  It’s not likely that any intelligent person would ever suggest these words appeared on your screen in a coherent form simply by the random processes of time plus chance.  If we know unequivocally that an intelligent mind organized these thoughts and words into meaningful statements, why would we expect unintelligent natural laws to do so within the scope of an even more complex universe?

Richard Dawkins, a proponent of Darwinism, once wrote, “There is enough information capacity in a single human cell to store the Encyclopedia Britannica, all 30 volumes of it, three or four times over.” [1]  A single cell...30 volumes of information (at least).  That’s a ton of information, and is extremely complex -- much more complex than my cheesy alphabet crackers.  But he wants you to believe that is possible without intelligent intervention. 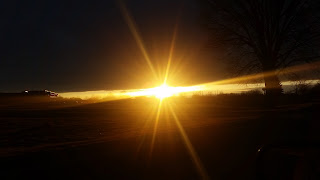 Said another way, “The amount of information that could be stored in a pinhead’s volume of DNA is equivalent to a pile of paperback books 500 times as tall as the distance from earth to the moon, each with a different, yet specific content.” [2]

So why do Darwinists suggest that all we see, touch, and taste are products of time plus matter plus chance, yet at the same time write off as fools those who would suggest a simple cheesy-alphabet-cracker message or blog post could happen accidentally and randomly?  We wouldn’t dare suggest one page or one volume of the Encyclopedia Britannica -- let alone 30 volumes of it three or four times over -- as being produced by chance and time! Somehow, modern society has been feeding on the goo that Darwinists have been feeding it.


Evidence points to an intelligent mind behind all that we see.  I don't have faith to be a Darwinist.