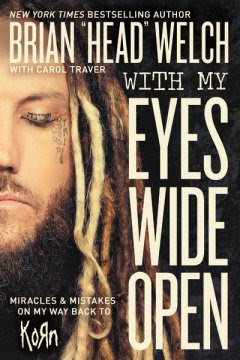 I’m a musician, so of course I jumped at the opportunity to review, “With My Eyes Wide Open”, by Brian “Head” Welch.  Head is the former-now-returned member of KoRn who trusted Christ for salvation several years ago.  This book details his various financial and familial issues throughout his past.

Overall, I thought the book was well written and interesting.  It wasn’t a thrilling page-turner, but for musicians, it is definitely an eye-opener.  Often, we dream of becoming famous this-or-that’s.  But until we get a glimpse behind the scenes of the toll fame places on people and their families, we don’t really know what we’re asking for.  I can tell you that I’m happy being little ol’ me after reading this one.

I cannot judge the man’s salvation or commitment, for that is not my position.  I do have a couple thoughts, though, that trouble me about some of Head’s spiritual methodologies.

Most prominent were the numerous times throughout the book where Head said he asked God to give him a sign for this-or-that, or to show him how he ought to proceed with a decision to be made.  When something favorable happened, it was deemed a positive sign of God’s apparent favor.  As is often the case in life, we know positive circumstances aren’t always necessarily proof of God’s leading or blessing as it pertains to a decision or course of action.

Throughout the book, Head described struggling with decisions about quitting and returning to music because of the negative effect touring had on his relationship with his daughter.  It was obviously a difficult struggle, and I’m not judging his final decision to return to KorRn as right or wrong.  However, Head said he initially quit the industry for reasons mentioned above, but little-by-little revealed that he moved right back into the industry – even though it had negative ramifications with his daughter.  I’m not in his shoes, and I recognize a passion for music is a difficult thing from which to walk away. The final decision is between him, his family, and his Maker.

All of this said, I truly admire Head's faith-commitment to Jesus Christ. What a profound life-transformation he has seen. It's great to see his trust in Christ is strong in the dark world of metal. As he said, God has saved him from the world to go into the world.

I don’t know that this book will be on the top-10 autobiographies list, but it is an interesting read for music fans.  All-in-all, I give the book 4 out of 5 stars.

Disclaimer: I received this book free of charge from BookLook Bloggers in exchange for my unbiased review.  All opinions are mine.
at 2:47 PM