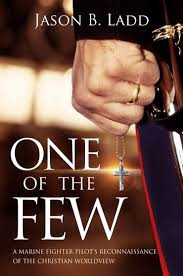 I was requested by the author to review his book, "One of the Few".  The following are my personal opinions and reflections.  I was not required to provide a positive review.

BACKGROUND: Jason Ladd achieved what many guys (young and old alike) only get to dream about -- being an F-18 fighter pilot in the United States Marine Corps.  As Ladd pens the story of his career path as a fighter pilot, he weaves in priceless life lessons learned along the journey.

LIKES:
THEOLOGY: First, and foremost, I truly appreciate Ladd's theology. He's solid.  In a world where charlatans flood the "Christian" best-sellers lists, it is good to see books with solid, biblical, gospel-centered theology in print.  No reader will finish this book and not understand the true message of the gospel of Jesus Christ.

"Faith is the great cop-out, the great excuse to evade the need to think and evaluate evidence.  Faith is belief in spite of, even perhaps because of, the lack of evidence." (Richard Dawkins)

What makes this great is that readers can see very simply on one page what the world has to say about life, and what our Creator has to say...and those are usually different messages!

CHRISTIAN WORLDVIEW APPLICATION: The book is packed full of various lessons learned along the journey of Ladd's life, lessons that only seem to come to each of us in different ways and at different times along our own journeys.  Obviously, many of Ladd's lessons were applied in retrospect, long after he trusted Christ for salvation.

DISLIKES:
TIMELINE CONFUSION:  I had a difficult time keeping track of the timeline, which seemed to have a disorderly flow to me.  Ladd jumped around from stories of boyhood, then to adulthood, then back to his college years, and back to boyhood and adulthood again.  That's not the exact order of the book, but I think you get the idea.  While I understand Ladd attempted to weave in various life lessons, placing them where he thought they applied, but the lack of chronology didn't help me in understanding his story.

UNFINISHED ACCOUNTS: Another detractor was unfinished stories left dangling.  For instance, while in the process of explaining night time carrier deck landings -- which was truly riveting -- Ladd ended with simply saying he attempted one last approach, only to see the ball heading for the top of the lens, which meant he could potentially over-fly the landing.  That was it...the account simply ended.  But the next chapter included Ladd celebrating his earning the coveted "eagle, globe, and anchor".  I naturally had to assume he successfully completed the training, but wasn't sure if I was missing more.  However, he told the successful completion of the training at the end of the book, but by then it was too disjointed to have the intended impact.

Similarly, when Ladd told about an injury his wife sustained to one of her eyes, he left the story incomplete. I only learned its conclusion via personal email interaction I had with him. I fully recognize Ladd's purpose for telling the stories he did in order to tell the more important life lessons about character development and Christian worldview.  But there's also the reality that when we tell (and listen to) stories, we want to tell/hear their conclusions.

TOO MUCH VARIETY: The book has a "variety show" feel, making it difficult to deeply engage any single theme.  There was just SO MUCH that flooded my brain, from matters of courage, alcohol, drugs, pornography, manliness, etc, to Christian Apologetics and the importance of having a well-informed Christian worldview.  All are good and necessary.  But it was too broad for me.

RATING: From a theological perspective, I give "One of the Few" 5 stars.  From a story line and overall theme organization, however, I give it just 3 stars.  The riveting nature of the fighter-pilot stories saves the book from falling flat.  I'd like to see it re-organized, but it's probably a little late for that now.  It didn't blow my socks off, but it would still be a decent read for a young man.
at 12:14 PM