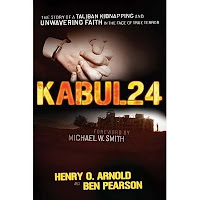 REVIEW:
KABUL, Afghanistan, 2001. Mere weeks prior to the September 11, 2001 terror attacks, eight Christian aid workers from Shelter Now International and sixteen of their Afghan co-workers were arrested by the Taliban and imprisoned. Although twenty-four were arrested, the book focuses primarily on eight: Heather Mercer, Dayna Curry, Silke Durrkopf, Katrin Jelinek, Margrit Stebner, Diana Thomas, Georg Taubmann, and Peter Bunch. For 105 days, they faced interrogations, torture, unfair trials, and inhumane living conditions by the hands of the Taliban. At the heart of their imprisonment was their faith in and reliance upon God alone for their miraculous escape and rescue.

Authors Henry Arnold and Ben Pearson take their readers on a fast-paced journey of a test of faith in nine chapters, a prologue, and an epilogue, all within 278 pages. This book is a page-turner, and a must-read.

REFLECTIONS:
I often approach biographies and documentaries with trepidation because I get bored with them quickly. However, “Kabul24” is not that way. It reads like a Hollywood adventure novel, while at the same time inspiring readers to consider how we would react in similar situations.

How long could your faith in God be tested before it wavered? What price would you be willing to pay for Jesus Christ? Would you risk your life to make others’ lives better? To what length would you go to see to it that the cause of Jesus Christ was advanced? Would you sacrifice your freedom for Jesus Christ if you knew ahead of time His cause would land you in prison? Would you pray for your enemies and those who persecute you while facing the harshest of treatment? Would you forgive your captors?

These, and many more, are questions I saw emerge in this gripping account of the Kabul 24. Through it all, I marveled at the number of miracles God performed to show His might. The authors keep their focus on the marvelous hand of God throughout their account of this terrible ordeal: “Often when one is put in extreme situations, the opportunity to experience miracles becomes available. To the skeptic, a miracle might be easy to deny or rationalize (particularly if it is subtle), but when miracles come one after the other, it becomes difficult to explain as mere coincidence” (Epilogue, p.263).
I am a Thomas Nelson Book Review Blogger.
at 9:51 AM

Email ThisBlogThis!Share to TwitterShare to FacebookShare to Pinterest
Labels: BRB