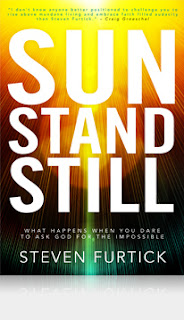 "Sun Stand Still", by Steven Furtick, is an attempt to inspire his readers to exercise what he calls "audacious faith", citing Joshua 10 as his proof text.  Early in the title, Furtick tells his readers that he hopes this book will ignite in them the motivation to "activate" their faith.  In my opinion, the book falls short of being inspiring on the grandiose scale he hoped.  I had greater expectations for this book.  Unfortunately, I found it quite lame.

-- I couldn't help but get the feeling the Furtick is very proud of himself (which comes off as arrogance) for having one of the largest churches in Charlotte, North Carolina.  In the prologue, he wrote of a conversation he had with one of his good friends while attending a U2 concert in the arena that would one day be home to Elevation Church.  Within the conversation which the book it seems that fame and praise were his strong motivators to establish Elevation.  When his dream to build a large, popular, cool church came true, he was able to call it "audacious faith" and use it as the springboard for this title. I wonder if he would have been inspired to write "Sun Stand Still" if he had not seen his "dream come true" and found himself preaching to only one hundred.

-- On a theological level, one has to deal with the confusion of "saving faith" and "activating audacious faith" throughout the title.  While Furtick writes in one area of the book that "audacious faith is not based on who you are or what you can do...[but is] based on who God is..." (p.120), he then writes in another area, "Sometimes -- a lot of times -- it goes that way.  Faith works.  Prayers produce." (p.137)  The questions that emerged to me were these: Is he saying my faith does all the working? or does God do it? Can my faith itself do anything?  Is he actually teaching people to have more faith in faith, or faith in God?

While I know this is not Furtick's intent in this book, it comes across to readers (dare I say, especially new believers) that prized outcomes have as much to do with our activating audacious faith as they do with God's sovereign control.  The message comes across so strongly in the book that he even writes a "critical clarification" on p. 40 so the reader isn't too confused: "We are saved by grace through faith in Christ -- period.  Don't look at the challenge to act in audacious faith as an add-on to this saving faith.  It's a call to press deeper into that faith, until it becomes more and more effective in your everyday life."

-- On the flip side of the coin, I never read anything without taking at least a crumb with me that's worthwhile.  I was at the very least challenged to examine my own faith, and whether it was truly a living faith at all.  Do I live a life where people see that I have my hope and faith in the only One who is truly faithful? or do they see me misplacing my faith in my employment, the economy, or even my family?

-- The only chapter I would really recommend from this book is 13: "When the Sun Goes Down."  It addresses the reality that "audacious faith doesn't mean your prayers work every time.  It means that God is working even when your prayers don't seem to be working at all."  (There's that "working" theme again...faith working, prayers working, etc.)  I think this sole chapter will align readers to the fact that faith is confidence in God and His character, not in what He can do for you or in hope that your dreams will become reality.  It aligns readers to the fact that even when things aren't going well for you, you can still trust that God is sovereign and in complete control of every situation in life.

-- Conclusion: If you can't already tell, I wasn't too impressed with "Sun Stand Still".  I've even listened to Elevation Church's podcast where Furtick preached a three-part series by the same title as the book.  My impressions mentioned here were reinforced.  I know he is exited and passionate about the subject, and for having the courage to write a book about such a difficult theological topic as faith, I give him credit where it is due.  However, I wouldn't have read much further than the first couple chapters if this book wasn't free.  And since I promised to review it, I forced myself to read it from cover to cover.  If I had to buy it, though, I wouldn't.  But I might pick it up at a garage sale.

I received this compimentary copy of "Sun Stand Still" from Waterbrook Multnomah Publishers to provide an unbiased review and post it to my blog.  I am not compensated for my review, and am not obligated to provide a positive review.  The opinions in this article are mine.
at 1:33 PM