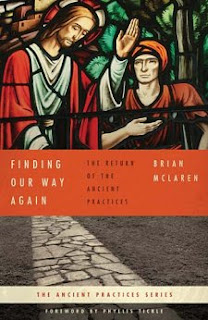 INTRODUCTION: "Finding Our Way Again: the Return of the Ancient Practices" by Brian McLaren is a re-publishing of the original title from 2008.  The difference being that editor, Phyllis Tickle, added study questions, which she calls "spiritual exercises", at the end of each chapter.

I agreed to read this book not because I especially like or agree with what McLaren's teaches, but because I wanted to give him another chance -- a chance to convince me he teaches true biblical Christianity.  I was not surprised that his teaching is still as -- if not moreso -- "New Age" as he has been in years past.

From the opening pages of "Finding Our Way", McLaren makes it clear that he hopes Christianity will become more attractive to the world as a "way of life", rather than as a "system of beliefs."  I couldn't agree more that Christians ought to "live" Christianity, not just hold beliefs.  However, early, McLaren draws parallels between the world's three most prominent religions: Christianty, Islam, and Judaism.  He professes to his readers that he believes Jesus, but the reader is left with no distinction between Jesus, Muhammad, or Moses.  He also leaves his readers with the notion that all three religions possess the same access to God, although theologically all three say something completely different about who Jesus Christ is.

OVERVIEW: The first part 14 chapters of the book contain a lot of fluff, reasons why people of all religions should practice spiritual disciplines, or the "ancient way".  McLaren believes one "great reason to pursue the ancient way" (which I will discuss in the following paragraphs)...[is to] "learn to practice peace, joy, self-mastery, and justice: because the future of the world depends on people like you and me finding it and living it and inviting others to join us. ... Maybe 'the world will be as one'" (p. 201).  Make no mistake, McLaren provides compelling reasons throughout the book why it is beneficial to practice various spiritual disciplines.  The result of his message, however, is not Christ-centered, but man-.  His goal is world peace, not truth.  Sadly, he mixes historical spritual disciplines with an ancient "new age" philosophy called "the threefold path."

MCLAREN'S "THREEFOLD WAY": Note: the following descriptions by McLaren are presented as an imaginary tour, guided by a woman called an "abbess".  While not a "spirit guide", she serves as an ancient guide into the spiritual way.  The dictionary describes an abbess as "a woman who is the superior in a covenant of nuns."

"Katharsis: Via Purgativa"(pp.151-158) is described by the abbess in McLaren's book as the beginning of the threefold way by "purging the house of the trash, dirt, and virmin that have accumulated within it."  Katharsis "depends on letting light come in, because without light you won't be able to see what's dirty and what needs to be cleaned and repaired."  The abbess tells the tourist that the powers of "pride, lust, greed...money, sex, and power..." must be acknowledged in our lives, otherwise "we won't make further progress on the ancient way."  "We will stay in darkness", she says.

He continues to inform us "by facing these monsters and exposing them to the light of God, novices would not be cured of pride, greed, and lust, but they would begin to be cured of a dangerous naivete about them."   He suggests that small groups of people should then gather in order "to review honestly together the hold" the three areas have on them.  He recommends journaling, taking on special challenges (fastings from things), practicing good deeds, spending time with loved ones.  In this stage, purgation "has nothing to do with penance", but "has everything to do with practice."

"Fotosis: Via Illuminativa" (pp. 159-168) is described by the same fictional abbess as learning to let light into our house (soul) because light helps us to see ourselves correctly.  McLaren writes, "Before katharsis...we were uninterested in God's light.  But now...we want the light to penetrate us in every part of our being and drive the darkness away."  In his own words, "we are seeking God's enlightenment" and "we learn the greater joy of accumulating light."

"Theosis: Via Unitiva" (pp.169-179), finally, is described as "the union of our nature with the nature of God."  He says, "if we are plunged into God's light and heat long enough, if we stay close enough to God for long enough...then we will catch a case of God" (like catching a case of the flu).

McLaren continues, "Before the beginning...God was All, and All was God."  And "within the matrix of time and space, the possibilities unfolded and flowered in a wild creative experiment we clumsily call evolution, combining and recombining to form complex proteins and viruses, trilobites and lunged fish...and finally naked apes we know as homo sapiens."  Although we "inherited the wealth and beauty and balance" in a "garden of possibility", McLaren says we "lost the plot", which results in war, waste, eroded soil, extinct species, squatter camps, slaves (etc)...and even worse, vicious religion."

The longing of the human soul, according to McLaren is that we "want to rejoin God".  We begin with katharsis and puruse theosis "not just for ourselves, not just for our souls.  That would be only a partial healing, a pseudo-salvation, a semisalvation.

THEOLOGICAL ABSURDITIES (an evaluation of the "threefold way"): It is plain that McLaren believes a different Jesus than is presented in the Bible.  Sadly, this book is being sold as a "Christian" book when it should actually be marketed as "new age" instead.  According to Biblical theology, a person is not saved by first letting light into his dirty soul, by cleaning the windows so the light of God can illuminate what we need to clean.  The emphasis of what McLaren teaches is on what WE must do to reach "spiritual enlightenment".  What the Bible teaches is that we are sinners in need of one very specific Savior -- Jesus Christ.

Scripture is clear that we are sinners incapable of saving ourselves.  We are mired in sin and need God to breathe life into us, to cleanse us first.  McLaren's method of salvation is one that requires us to act on behalf of our own salvation.  In fact, in the section on Katharsis, McLaren says this step toward enlightenment has "nothing to do with penance."  Repentance, however, is/was a gigantic part of Christ's work!  He and his forerunners were regularly telling their hearers, "Repent!!!"

Finally, one can hang out in a church, pray, fast, and act like a believer and follower of God, talk the right way and say the right words, practice the right disciplines.  But simply "staying close to God for long enough" will not, in fact, give us a "case of God."  It will not transform us.  It will not cleanse our sin.  It will not in one itty-bitty way make us right with God.  Our closeness to a fire will never turn us into fire; our closeness to God (apart from Christ) will never make us godly.

All-in-all, while McLaren professes to be a believer, he leaves out the one most important event in history and Christendom: The Cross!  He completely ignores the work of Jesus Christ ON the Cross, although he makes great ado about His loving miracles PRIOR TO the Cross.  It's as if Calvary's Cross never emerged.

RECOMMENDATION: This book will make great fuel for my wood stove!  The only reason I would suggest reading "Finding Our Way Again" would would be so you could see for yourself the absurdities taught by McLaren and so that you might be more prepared in potential conversations.

RATING: I give this book just 1 star out of 5, which comes from the result of being inspired to ask if I spend enough quality time with my God in prayer, reading, memorization, etc.  The other 4 missing stars are due to McLaren's horrible theology.  Shame on Thomas Nelson Publishers for publishing this as a Christian work.  The publishers have clearly not read it carefully!


DISCLAIMER: I received this book free of charge in exchange for agreeing to provide an unbiased review.  I am not required to submit a positive review, and I am not paid for my review.  This review is my opinion.
at 9:01 AM