"The Jesus We Missed", by Patrick Henry Reardon 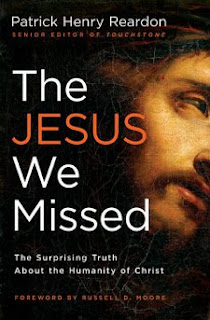 I find the hypostatic union of Christ -- that state of being fully God and fully human at the same time -- mystical and intriguing.  I have wondered if Jesus knew certain things that he was simply not willing to reveal, like a genius ahead of his own time. For instance, did Jesus know how to build oil refineries and computers and gasoline engines?  He was God, and God knows everything, right?

As it turns out, I think some types of my questions have been answered, not because these are the very questions Reardon answers in the book, but because what he teaches about the humanity of Jesus makes a lot of scriptural sense. I am fully convinced Jesus had no idea how to build a gasoline engine. Not because he wasn't God, but because he was fully human -- and nobody else knew then either.

But Reardon isn't dealing with silly questions like mine in this book.  I only use those questions for simple examples of the more difficult issues he tackles in the book.  One such topic -- Jesus growing in knowledge -- was Jesus being often found in his Father's house, reading the scriptures, studying them, committing them to memory, and asking questions of his rabbis.  The questions he asked weren't because Jesus was "playing dumb".  He was literally learning. Dr. Luke wrote, "Jesus increased in wisdom and stature" (Lk 2:52). Expounding upon this, Reardon writes, "...it is wrong to imagine his growth was unrelated to what he read -- any more than his increase in stature was unrelated to what he ate" (p.12).  He also addresses Jesus learning from his mother and watching her faith in God, Jesus in prayer (something we do because we depend on God), Jesus' resurrection, etc.  These are no simple, easy-to-answer topics.  Reardon carefully draws us to the Scriptures (primarily the gospel narratives) to give meaning to the humanity of Christ, and he does so in a way that the book proves to be a good study tool for the person interested in studying another aspect in the life of Christ.

One notion I found truly interesting in the book was developed in chapter 2.  Regarding Mary, "she was truly the mother [of Jesus], and not simply the 'bearer', of God's son" (p.24).  She raised Jesus just like any other mother would raise a child.  She cared for him, nurtured him, taught him faith, etc.  Why?  Because he, like Mary, was truly human.  If we cannot fully believe he was human, then our theology breaks down when we see that Jesus became like us and was tempted just as we are.

DISLIKES: One of my dislikes is that a couple chapter endings were choppy.  Typically, authors will conclude a chapter with a short paragraph, and gently segue into the topic that follows in the next chapter.  Twice, Reardon introduced a topic only to write, but we'll address that in a later chapter.  Since my mind was there, I wished he would have continued with the topic.

RATING: "The Jesus We Missed: The Surprising Truth about the Humanity of Christ" is 209 pages long consisting of 12 chapters, and epilogue, and a short appendix.  Overall, I give this one 3 1/2 to 4 stars.  The topic and ideas were good, but the jumpiness of style and my growing lack of interest in later chapters made me want to finish it just to be done with it.

Disclaimer: I received this book free of charge from Booksneeze (Thomas Nelson Publishers) in exchange for my unbiased review. I was not threatened, coerced, or promised compensation for providing a favorable review. All opinions are mine.
at 9:46 PM