"Tale of the Penitent Thief", by Don Willis (book review) 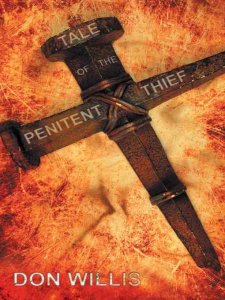 "Tale of the Penitent Thief" is the fictionalized historical account of one thief who would be crucified next to Jesus.  I thought it was a good book -- not exceptional -- but definitely a good read.  I'll explain why I thought it was only good, and how I think it could have been improved upon.

First and foremost, I give Don Willis a whole ton of credit for attempting to write a historical fiction novel.  They are challenging to write, but when done well, they are interesting to read.  I like the thought put into what might possibly have been the character's lifestyle prior to "meeting" him in the pages of scripture.  A few themes were thought-provoking.

Next, like Willis, I, too, am a police officer.  So I have this thing I do when I watch people at the store or restaurant.  I think to myself about what might be going on in a person's day, or what might have led them to be where they are.  While I can only speculate or imagine these things, imagining puts a real person behind what was once just a face in the crowd.  That's was Willis does in this narrative.  Several characters are introduced, from Mary & Joseph to Herod; Simon who carried Jesus' cross to Barabbas.  They're typically names we skim over when we read the Bible.  But in real life, they were real people with real blood in their veins and their stories intersected.

First, the novel carried only a singular plot. While there was a giant twist at the end, it came across to me as a "hocus-pocus I tricked you" kind of thing.  No, it wasn't the proverbial, "...and then I woke up...", but it was still disappointing.  Had there been a sub-plot throughout, the trickery at the end would have been largely absent.

Next, the book spanned a long time -- approximately 30-35 years.  This was the lifetime of the thief who would go to the cross from his boyhood years (when he met baby Jesus) to his death at manhood.  I found it difficult at certain points to ascertain approximately how much time had passed and whether I should picture the character as a boy, a young lad, or a grown man.  Just when I thought I figured out the main character's approximate age after any given jump in time, Willis jumped ahead again an untold number of years.  I was often left guessing.

There were a few punctuation errors and several spelling errors, mostly in the forms of wrong word-usage.  For example, the chosen word may have been spelled correctly (like "he" for instance), but Willis should have used "his" in the context of the sentence.  It would have been only a slight distraction if it hadn't occurred more frequently than I would expect from a published novel.

Finally, whenever I read a book that is offered only in digital format, I am a little skeptical that it will be a quality read.  So, I automatically approach it rather critically.  Unfortunately, then, when I see numerous spelling, grammar, or word-usage errors, it only serves to confirm my original suspicions.  I would have hoped Willis and Thomas Nelson Publishers could have invested more time and effort into proof reading.  Thus, my skepticism of the polishing quality of digital-only books remains strong.


DISCLAIMER: I received this book free of charge from Thomas Nelson Publishers in exchange for my unbiased review of it.  All opinions are mine.  I was not promised favors -- or coerced -- to provide a positive review.