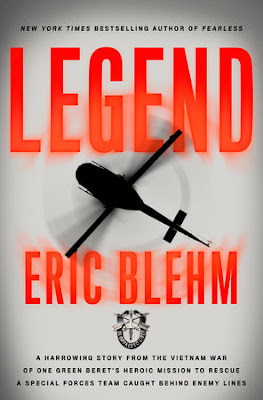 “Legend” is the riveting historical account of Sgt. Roy Benavides, a US Army Green Beret who fought valiantly during the war in Viet Nam.  Benavides perilously risked his life to save others, while sustaining his own life-threatening injuries.  Benavides earned a Silver Star for his actions on May 2, 1968, but the full scope of his actions sat in obscurity for years.  A local newspaper caught wind about him and published it what they had.  Benavides’ comrades wrote letters on his behalf to the US Army powers-that-be in order to recognize his efforts as worthy of the Medal of Honor.

The opening chapters introduce readers to Roy’s mischievous boyhood.  Eventually, however, he enlisted in the Army, which took him to the Vietnamese war theatre.  After setting the stage, Blehm brilliantly inspires readers to consider the many soldiers and helicopter pilots who fought there.  While telling their stories, Blehm casually assigned Benavides to the shadows for a handful of chapters.  At just the right time, though, Blehm reintroduces Benavides to the war action, explaining his heroics in gripping detail.

While I’m certainly no history buff or war historian, this is one of the most gripping and enthralling war stories I’ve read.  Focusing primarily on southern Viet Nam and its local battles, Blehm also uncovers the secret conflict waged in Cambodia along the Ho Chi Minh Trail.  Not only did I enjoy reading “Legend”, I also learned a great deal of history I never realized existed.  I don’t regret reading it. Because I don’t want to spoil the story for you, I’ll let you decide if you’ll read the rest.  In the space remaining, though,  I’d like to discuss a few thoughts that came to mind while reading “Legend”.

First, I continue to marvel at the heroics of brave men who have fought valiantly for our freedoms.  Not only have they and do they fight four American’s freedoms, but they do it for complete strangers on the other side of the globe.  It is one of mankind’s wonderful feats, that we lay down our lives for others in need.  I am truly thankful for their courage in the face of danger, and for their sacrifice.  As one of my father’s tee-shirts reads, “All gave some; some gave all”.

Next, stories like this remind me that greatness is primarily demonstrated, not merely earned.  Although Roy Benavides grew up in humble beginnings, and often finding himself at the center of trouble, he grew to understand honor and the value of a good name.  At one point in life, Benavides made a decision to be a man of valor, rather than one of trouble.  He demonstrated that change of character by his heroic actions.  He didn’t simply give a nice speech or accomplish mere academic accolades.  He demonstrated character and action.

This leads me into my final point: Seek out some of the great men and women around you -- learn their life story, discover who they really are, seek out their wisdom.  You will certainly find something you can learn from their example and experiences.

RATING: I give “Legend” 5 stars out of 5.  Eric Blehm is a brilliant author and phenomenal story-teller!  I read one of his other books (“Fearless”), and after having read this one, I will no doubt read others he has authored.


DISCLAIMER:  I received this book free of charge from Blogging for Books in exchange for my unbiased review of it.  All opinions are mine, and my positive comments were not forced upon me.  I was not obligated to provide a positive review. 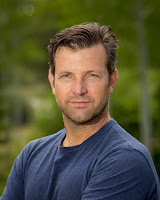 Eric Blehm is the bestselling author of Fearless: The Undaunted Courage and Ultimate Sacrifice of Navy SEAL Team Six Operator Adam Brown  andThe Only Thing Worth Dying For, which recounts the story of the first Special Forces A-team to infiltrate Taliban-held southern Afghanistan weeks after 9/11. Both titles were New York Times and Wall Street Journal bestsellers. His book The Last Season was the winner of the National Outdoor Book Award and was named by Outside magazine as one of the 10 “greatest adventure biographies ever written.” Blehm lives in southern California with his wife and children.
at 12:58 PM