"Possible: A Blueprint for Changing How We Change the World", by Stephan Bauman (book review) 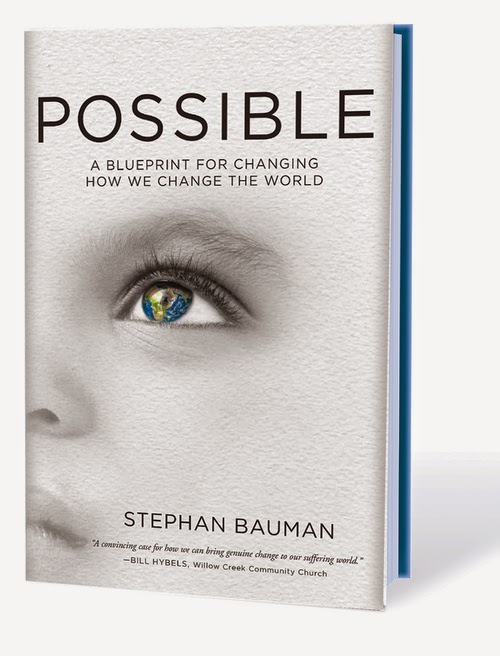 "Can we change the world?" is Bauman's question, and his goal is to convince us that we can.  Unfortunately, Bauman fell short -- way short -- of achieving his goal with me.

As an ordained minister, Bauman certainly began early in the book with fluffy religious talk and soft references to God.  He even cited numerous people, like Mother Theresa, T.S. Elliott, Dallas Willard, and Nelson Mandela, to name a small handful.  While I respect what little I know of those individuals, I would have expected an ordained minister to open the first chapter with a strong introduction to what he believes is the call of God to "change the world" from the lens of Scripture.  But the book was so full of theological garbage that another book could be written to refute all of his Emergent-like errors.  I don't know where to begin, so I'll start at the beginning, I suppose.

CHANGE THE WORLD:
Bauman laid out 3 main points that he calls the "blueprint" for changing the world:
(1) "The first is universal, archetypal, and invitational.  It's God's divine blueprint for saving the world"...and you and I are "...invited, by design, to join in";
(2) "The second is personal: how God has uniquely created, called, and designed you to participate in remaking the world"...and "we'll explore and expand the idea of creativity and our role in remaking the world";
(3) "The third is practical: what you must do to effect positive change..." (p.12)

In short, according to Bauman, you and I are invited to "change" and "remake" the world, and not to introduce people to Jesus Christ, the Forgiver of sin.  Bauman's approach to "changing the world" was so worldly-based that I wonder if he ever considered the possibility that God never asked us to change the world. Do you want to know why?  BECAUSE IT ISN'T THERE!

In fact, he omitted two all-important comments, both of which were spoken by Jesus: "You will always have the poor with you..." (Matt 26:11, Mark 14:7, John 12:8), and "Go into all the world an make disciples of all nations" (Matt 28:19).  But then, I suppose acknowledging the truth of Jesus's words would likely derail Bauman's goal of convincing us to "change the world".  Ironically, Bauman wrote, "Too often we tackle age-old problems of poverty or injustice by retreading ideas that have failed.  Sometimes we give up because we are convinced the problems are impossible to overcome" (p.72).  Maybe that's because Jesus was actually correct about poverty, and that he meant make disciples, and not "remake the world".

WHERE'S THE GOSPEL?
NEVER THROUGHOUT THE ENTIRE BOOK did Bauman EVER introduce his readers to the true gospel of Jesus Christ.  Chapter 5 was close.  It was chock-full of gospel-sounding words, but never the true gospel of Jesus Christ.  Just when I thought Bauman was sure to tell us what it is, he capitulated to universalism with the following: "But what is good news today?  Is it not that we can be free from pain, shame, wrongs, and suffering, temporally and eventually, once and for all?  The gospel in its purest form puts suffering out of business, and it begins here and now" (p.80).

Did you catch that?  Bauman turned the message of the Kingdom into a message that is no better than one of our freedom from earthly suffering.  He had the perfect opportunity to explain that we are all riddled with sin, and that we stand to be condemned under God's wrath if we die in our sins.  He failed to offer any explanation into the substitutionary atonement of Jesus Christ in our place. He did not explain that the great news of the gospel is that the death, burial, and resurrection of Jesus Christ secures (for those of us who trust him) our freedom from sin (not from earthly suffering) and rightness with God!

Later in the book, Bauman cited Jesus as the ultimate example of a prophet, saying, "He (Jesus) offered ultimate solidarity through his death while also demonstrating a sort of divine protest through the resurrection" (p.119).  Really?  Ultimate solidarity?  Divine protest? No!  That's not what Jesus's death, burial and resurrection were about.  They never were -- nor ever will be -- about uniting mankind under a banner of divine protest against injustice.  They were -- and always will be -- about making sinners right with God, and he rose from the dead to give forgiven sinners eternal life!  Sadly, though, "Being prophetic is calling attention to the will of God...for Belinda (Bauman's wife), it means telling the world about...the people of Congo" (p.119).  Her prophetic message to the world is about Congo?  I wonder when Jesus said, "Go into all the world and tell them about the suffering of people in Congo, and not about me."

TAKE THE GOOD WITH THE BAD:
I didn't find myself agreeing with Bauman very often, nor was I at all inspired to "change the world".  But the entire book couldn't be junk, could it?  Here's one (of only a few) quote I appreciated: "...our actions tell us more about our values than our stated beliefs.  Our behavior, in fact, is a window to our value system.  And our values tell us what we really believe" (p.95).  I agree!  The great mercy bestowed upon forgiven sinners ought to inspire us to proclaim the same message of grace to others, and to extend grace to them in their joy AND their suffering.

CONCLUSION:
I fully recognize the predicament in which I place myself when I disagree with such a book as "Possible", because doing so might suggest I disagree with righting wrongs, defending the defenseless, feeding the hungry, or clothing the poor, etc.  But that is absolutely not it.  In fact, I believe true followers of Jesus Christ ought to be doing those things.  But those things ought not be the central focus, or a false gospel of sorts.  Those things ought not replace the message of the gospel of Jesus Christ, for no amount of clothing, food, shelter, justice, etc. will EVER make a sinner right with God.  Instead, the sinner will simply die a sinner with clothes on his back and food in her belly.  The good news of Jesus Christ must be spoken in conjunction with good deeds!  And Bauman has failed to do just that in this book.

I cannot support this book (and, by the way, I am disappointed Louie Giglio would write an endorsement for "Possible"), nor can I recommend it to anyone.  In fact, when I was offered the book for review, I was asked to request and give away some small booklets to people in my church.  I didn't want to be greedy, but I was obligated to request at least one packet of 10 booklets.  So I received a pack of 10...but I will not be giving ANY of those booklets to anyone -- not in the church, nor at the supermarket.  Sorry, Multnomah.  But shame on your for peddling this theological garbage for profit!

RATING:
Just 1 star, because zero is not allowed.

DISCLAIMER:
I received this book free of charge from Blogging for Books in exchange for my unbiased review of it.  All opinions are mine, and were not forced upon me.  I was not required to provide a positive review...which I didn't.

I guess if you're still interested in the book, you can click here to visit the author's web page.
at 8:46 PM