"THE LANGUAGE OF LOVE AND RESPECT", By Dr. Emerson Eggerichs: 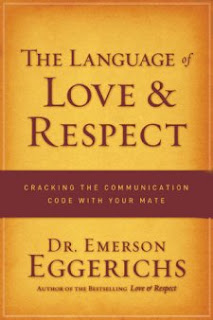 “The Language of Love and Respect”, by Dr. Emerson Eggerichs:

SUMMARY: She craves Love; He craves Respect. Dr. Eggerichs contends that love and respect are the air hoses that supply vital life to any relationship, and stepping on a spouse’s air hose could very likely lead to suffocation. Spouses ought to love and respect each other according to these biblical principles because love and respect in marriage are simple reflections of a believer’s life in Christ.

LIKES: I think “The Language of Love and Respect” is a very good book. Dr. Eggerichs is easy to read and the applications he suggests seem realistic, and his writing style is peppered with wit and relevant anecdotes. The book is written like a good reference manual, where someone could pick it up, select a principle to briefly read, and understand it in a few short paragraphs because following each of the typical introductory paragraphs, Dr. Eggerichs includes several stories to further explain the presented concepts to his readers.

DISLIKES: I am a bit reluctant to include the following critique in the “dislikes” category, but it seems to fit better here than in the “likes”: The book is a bit redundant since Dr. Eggerichs has already written and filmed a similar title, “Love and Respect”. The concepts in “The Language of Love and Respect” are largely reproductions of the original. In fact, looking up the history of this book shows it was previously released under a different title. So, it seems that the book was written simply because the first installment was such a huge success that the publishers must have thought a second would be as equally huge. And I’m sure it will, but I think someone could read this book and not need to have read the original “Love and Respect”. In either case, owning one installment would probably render ownership of the other obsolete.

CONCLUSION: “The Language of Love and Respect” is certainly insightful and inspiring, and I would highly recommend this book to anyone who has not read, watched, or attended “Love and Respect”.

I blog reviews for Thomas Nelson Publishers.
at 9:42 PM