"THE COMFORT OF VENGEANCE", by Ben Redmond 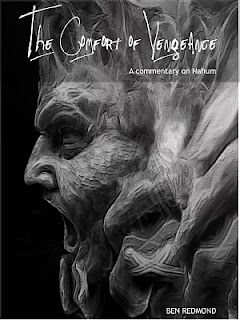 ﻿“As Comforting Avenger, God brings hope to the oppressed and fear to the oppressor.” (p.32) “The Comfort of Vengeance”, authored by Ben Redmond, youth pastor at Westwinds Community Church in Jackson, MI, is a commentary on the Old Testament prophet, Nahum’s, prophecies against Assyria.  Redmond writes, “there is a big difference between God in the First Testament [OT] and Jesus in the Second Testament [NT]” (p.19). Many ponder how God could be so mean in the Old Testament and so loving in the New. This idea serves as Redmond’s springboard into solving the dilemma. I think Redmond did well by bringing the entire message of Nahum – the message of a mean, angry God – full-circle to the Cross of Calvary.
LIKES:

I truly believe the pinnacle chapter in “The Comfort of Vengeance” is #16. It was built up when I became concerned with one paragraph in chapter 15, which read, “We will be judged for our sin eventually, every one of us. For now, we believe that final judgment has been suspended through Jesus. When we live apart from God in this life, the consequences are largely a natural part of our world.” (p.139) While the Bible is clear that we will all be judged, it doesn’t suggest judgment is “suspended” for believers, as though Jesus simply delays it.

Instead, God’s judgment of our sin was finished on the Cross. Jesus Christ condemned sin in the flesh that the righteous requirements of the law might be fulfilled in those of us [who are His]” (Rom 8). And that is precisely where Redmond leads his readers in the 16th chapter of his book, which is why it’s my favorite. He asks, “How can anyone survive [God’s judgment]? The answer is Jesus. The work of Jesus on the cross allows us to survive the judgment of God.” (p.143) “The cross says that when our skirts are lifted, Jesus will be the only thing God sees.” His best statement looked like this: “The cross wasn’t just a token sacrifice; it was all of God’s judgment and anger toward the world, dropped like a bomb on one person.” (p.144)

While Redmond admits, “God doesn’t make sense to me” (p.19), I think God makes more sense to him than he gives himself credit for. He gets it that God is jealous for His people; that He is a just Judge; that He will “have vengeance on His adversaries and wrath on His enemies” (Nah 1). He gets it that we are worthy recipients of God’s anger, and that God finally and completely unleashed all of His anger on sin upon His very own Son, Jesus Christ. The God of wrath portrayed in the Old Testament didn’t disappear at the end of Malachi. He crossed over a couple pages into the New. But the magnificent love of God for us would cause Jesus to step in the way when He decided to throw the final blow to sin and death. Jesus bore it all on Himself. “How can anyone survive?” Redmond asks. “The answer is Jesus.” Brilliant plan! Brilliant paragraph.

Redmond did well in a few chapters inspiring his readers to identify themselves with the ugly monster deserving of God’s wrath. G.K. Chesterton once commented when asked what is wrong with the world.  He replied, "I am what's wrong with the world."  Redmond tied the message of Nahum together so thoughtfully that even an unbeliever might see his/her own ugliness and finally turn to God for mercy. The reader couldn’t help but recognize the wrath of God that was ever present in the Old Testament was alive and well in the New when He abandoned His Son on the Cross in our place.

There were more than a couple chapters in the book where Redmond could have dug into the topic discussed much deeper than he did. For example, in Chapter 6, “faith” could have been discussed more in depth by considering what Biblical faith is, where God is when life stinks, where God is when we don’t get answers, etc. Another is the theme of identifying with the “villain”. I would have liked to see Redmond explore that idea more by maybe combining a few of the shorter chapters that touched on the topic together into one larger, deeper chapter.

There were a few “ticks” throughout the book (spacing issues, spelling errors, etc.). While these didn’t detract from the message of the book, it is important to speel chek are werk so peepal tak us serusly. It wasn’t nearly that bad, but you get the idea. Seldom do great authors have errors. If so, one could count them on one finger.

The book is short and sweetly simple. The average chapter is about 4-5 pages with double-spaces between paragraphs, and sometimes single sentences make up an entire paragraph. This makes the book even shorter. To be sure, the book was intended to be a “teaching atlas” for Westwinders. “The Comfort of Vengeance" is wrapped up in 3 sections, one section for each Biblical chapter of Nahum, and 17 chapters. There are also questions for further reflection at the end of each section, tying all the chapters of that section together. In all, the book runs 161 pages. It reads much shorter than that, however.