PRAYER WITH SURVIVORS OF TRAGEDY:

I started reading this book, Gray Matter, by Dr. David Levy over the weekend that I received for review from Tyndale House Publishers.  (This posting is not a book review.)  The jist of the book is this: Dr. Levy is an accopmlished and well-respected neurosurgeon in San Diego, and a couple years after becoming a Christisn he underwent a life transformation that led him to start praying with patients before and after surgical proceedings.
﻿ 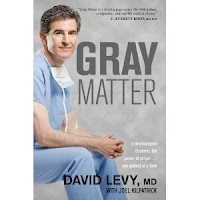 I agreed to review "Gray Matter" because my personal quest and theme in 2011 is to spend more time in prayer than I did in 2010...which, I regret to admit, isn't actually all that hard to accomplish.  I have been riveted by Dr. Levy's devotion to his career and to his God.  He admits that his requests to pray with patients gives many of them an uneasy feeling, as though he's overly concerned about the inherent dangers of their particular situation or that he doesn't have what it takes to make for a successful operation.  Nevertheless, he puts those feelings aside and gently asks them if he could pray with them (not just for them).

The other day at work, I was sent to give another death notification to a man, whom I'll call Jeff, whose brother committed suicide in another state.  I was requested to locate the next of kin and deliver the horrible news.  It was difficult enough just trying to locate him, let alone jumping through all the hoops his employer had in place to protect him once I did find him.  Prior to meeting up with Jeff, however, I prayed that the Spirit would still my anxious heart, quiet my frustrated thoughts, and help me deliver a peaceful message amidst tragic circumstances.

I met Jeff and delivered the news to him, and quite honestly, he received it well, remarking, "I'm actually not surprised to hear this.  He's been having some big problems lately.  My sister's really going to take it hard, though."

As our conversation was drawing to a close, I felt a nudge in my spirit (some might call it a still, small voice), "Ask him if you could pray with him."  Our conversation continued and he was moving around in his chair as if to stand up and leave the room.  As he was doing that, I sensed that nudge again, "Ask him if you could pray with him."
"Jeff, would you mind if I pray with you before we leave today?"  He looked at me in what seemed like a different light and replied, "I would like that, trooper.  I'm a believer myself."  My prayer was simple.  It was short, lasting all of 15 seconds.  I didn't need to preach a sermon or make Jeff uncomfortable...after all, how many people have had the cops pray with them?  Basically, I prayed that God would be sure to make Jeff and his sister know that He was near at this time of tragedy.

After concluding, Jeff appeared comforted and at peace.  It didn't change the hurting in his heart, but I think it helped him remember that God really cares and that He is always near.  He thanked me for the way I delivered the message and how I handled the situation.  It's actually hard receiving "thanks" when bearing bad news, but it felt good to be of service to Jeff physically and spiritually at such a tragic time.
at 1:10 PM