"The Chasm", by Randy Alcorn 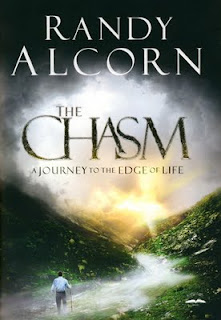 In this brief, gospel-centered allegory, Nick Seagrave is on a journey through life to the edge of eternity.  Along his journey, Nick meets several characters who attempt to entice him to walk one of two roads -- one leads to life in Charis, or the City of Light, while the other leads to death.

"The Chasm", which is the much-condensed version of "Edge of Eternity" (also by Randy Alcorn) reads much like a simple version of three books married together: "Pilgrim's Progress", by John Bunyan, and "The Chronicles of Narnia" and "The Screwtape Letters", both by CS Lewis.  If you've read them, you've read this one.  I found it rather boring and predictable...but unpredictability isn't what Alcorn was after.  His intent is obviously to explain the gospel as clearly as possible using allegory.

While I'm reluctant to say the book wasn't interesting (since it is a play on the gospel message)...I have to say, it wasn't all that interesting.  Aside from the presentation of the gospel, I found the story immature and lacking the ability to capture and keep my attention.

LIKES: In this story, the gospel message is clear and easily understood.  A young teenager could read it; a semi-interested co-worker could read it.  It almost reads like young-adult fiction, though.  It's not heady, but is very simple.

DISLIKES: There are a few scenes that come across more as scare tactics rather than gospel truth.  For example, one scene early in the book has Nick's life being replayed before the world as his audience.  In that audience are his wife and daughters.  They watch what was a seemingly private moment he once had in a hotel room.  While there is only speculation as to what occurred in that room (pornography? adultery?), it is presumed that his family is suddenly made aware of his moment of privacy.

The issue I have with this is that I find this idea of "all-the-world's-an-audience" nowhere in scripture.  Yeah, yeah, I get it: it's a story.  But it's written in a way that is intended to provide play-by-play of the gospel message.  The gospel clearly indicates we will answer for every thought, deed, and word.  Nowhere does it suggest, however, that everyone in the history of the planet will be watching at the time of our answering.  I have a problem with this because I don't want people to be scared into trusting Christ for salvation; I don't want to see people simply "scared straight".  That emotion doesn't last long.  I hope, instead, they would make an intelligent decision based on truth.

RATING: Overall, I give "The Chasm" 3 stars for gospel presentation and simplicity.  The book is extremely short (110 half-size pages) and can easily be read in one sitting and passed along as an evangelistic tool.


I received this book free of charge in exchange for my honest review of it.  I was not promised reward or threatened in any way to provide a positive review.  All opinions are mine.
at 8:58 PM