"THE FIGHT OF OUR LIVES", by William J. Bennett & Seth Leibsohn 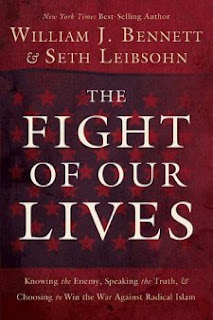 It a violent criminal offender was released from prison, and upon his release committed more atrocities, most people would be appropriately outraged.  What happens, though, when the prison system or government lets us down after catching that violent criminal subsequent times?  What would you think about the "system" if the offender's probation was repeatedly extended?  Would you shrug it off, thinking, "Well, that's just the way it goes."?  Or would you demand, "Something must be done to stop this horrific trend!"?

That's the basic premise of "The Fight of Our Lives", only the violent criminal offender is Islam, and the "system" is our government that continues to appease Muslim Extremists, hoping they will simply go away and leave us alone.  The problem is, it doesn't work!  And our political leaders have not paid attention to the history books to know the problem isn't going away.

Page after page of this book is filled with documented quotes from Muslim extremists who wish for America's demise; and page after page is filled with documented appeasing responses from our cowardly "leaders".  As the authors point out, "While we believe we are in the fight of our lives right now...there is grave doubt as to whether the American leadership believes it" (p.4).

Although Bennett and Leibsohn fill the book with historical events and people, like Faisal Shahzad (the Times Square Bomber), Nidal Hasan (the Fort Hood, TX shooter), Hamas, Al-Qaeda, the 9-11 attacks, and London Subway bombings, "The Fight of Our Lives" does not read like a boring history text book.  Instead, I found myself hanging on to every word and name, constantly checking the Internet for their cited resources.  I was honestly flabbergasted at the lack of appropriate government response to those terror organizations who only desire our utter destruction.

In the government's appeasement of our enemies, terrorists who have been banned from the U.S. have been allowed admittance once again; politicians are afraid (yes, afraid) to call our enemies terrorists; they are afraid to label them as evil.  In chapter 7, "False Peace, True Peace", one section entitled, "Understanding Islamic Violence", beginning on page 116, reveals how we must set our minds: "If we are at war (and it is worth remembering that war has been declared on us), it is the most vital of first steps to identify the enemy, to know who attacked."  Continuing further, "...the terrorists themselves tell us they are Muslims, and they cite Muslim theology to justify their attack -- a theology too few Muslims seem willing or able to refute as doctrinally unsound."

If our world's current events fascinate you as they do me, you will do well to read this book.  It's not terribly long; only 153 pages, but could easily be longer and would still maintain interest.  I rate this book 5 out of 5 stars!


Disclaimer: I received this book free of charge from Thomas Nelson Publishers.  I am not coerced, threatened, or rewarded to provide a favorable review.  All opinions are mine.
at 7:31 PM