"HELL, ROB BELL, AND WHAT HAPPENS WHEN PEOPLE DIE", by Bobby Conway 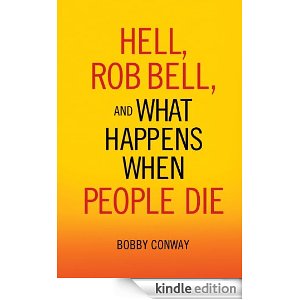 There are some conversations best left untouched in public circles, like religion and politics.  But another that is often neglected because of its sensitive, even politically incorrect nature, is Hell.  It's difficult to talk about openly because (a) if it really exists, nobody wants to come to grips with the notion that grandma or grandpa -- or even we -- might be or go there; (b) it is difficult to imagine decent people suffering for all eternity in Hell for finite sins; (c) it has often been used as a scare tactic to coerce people to believe a certain way.  I could continue, but you get the point.

"Hell, Rob Bell, and What Happens When People Die" is a short rebuttal to Rob Bell's recent release, "Love Wins".


So why this book?  Why is it necessary?  Why not let Bell write his best-seller book about his beliefs on Hell and just get on with life?  Because "a Barna poll found that 25 percent of born-again Christians maintain that all people will eventually be accepted by God" and "only 1 percent of Americans actually think they are going to hell."

I think Conway is right when he wrote, "Christians are embarrassed by the doctrine of Hell", that it is "seldom preached from the pulpit."  If the Bible is true; if Jesus bore witness to the truth, to reality; then Hell is a real place with which we real sinners must come to grips.  We have shied away from Hell's reality because we have forgotten that Hell was God's idea in the first place.  We have forgotten that sin is not merely something that is finite or horizontal in nature, that we can only commit "so much" sin in any one lifetime.  Instead, sin must be seen as infinite and vertical in nature.  We must recognize that sin causes us to fall infinitely below the holiness of God, and that height is infinitely great.

Conway is spot-on in his approach to the horrible reality of Hell.  But he doesn't leave the reader hopeless, for he presents the simple, clear gospel, giving hope that sinners can be saved by God's grace through Christ from this horrible eternity.  He offers the promise of real hope, not the false hope that Bell provides.  Conway urges his readers that when talking about such a difficult topic as Hell, "When we who call ourselves Christians talk about hell, our demeanor and our words should express humble brokenheartedness, with no hint of arrogance.  Nonbelievers have a hard enough time digesting this terrible truth -- we should not make it even more tasteless with a love-lacking presentation.  Our voice should have the ring of urgency, truth, humility, and brokenness."

For his careful and truthful presentation of Hell's reality, I give Conway 5 stars on this book!  It was the perfect length.  Perfect for sharing.  He lovingly, but sternly, corrects Bell's flawed doctrine while presenting the message of the gospel of Christ.  It's a very quick read, and extremely cheap in e-book form.


DISCLAIMER: I received this title from Waterbrook Multnomah "Blogging for Books" free of charge in exchange for my unbiased review.  I was not threatened or coerced in any way in order to provide a positive review. All opinions are mine.
at 9:08 PM