"The Book of Man", by William Bennett 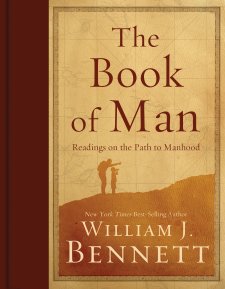 "The Book of Man" is no mere book, but a volume. Want a good workout? Carry this one around a while! It's thick with short stories about various great feats of great people throughout history, specifically men.

The stories in this volume don't display courageous men solely in battle. Although one section of stories does just that, these stories also reveal the character of men in the way we compete in sports, how we work, the way we worship, our leadership in the home, etc. One quote that I really like is borrowed from Lt. Cmdr Eric Greitens, author of "The Heart and the Fist", and is found in the short "Profile: A Navy SEAL". He writes, "...we live in an America that offers its young men very few tests, very few cultural markers through which they can, to which on the other end they can say, 'You know what, I've become a better person, I've become a man'" (p. 263).

The Book of Man is a neat book, one in which the reader can freely skip around. Its not a book one would read cover-to-cover in a week. Instead, it makes for a good "bathroom reader", for the coffee table, or even a gift for a pastor to supplement his sermon illustrations. I imagine it could be used by men's groups to facilitate discussion in issues that run far deeper than politics, war, and sports. It's deeper intent is in dealing with courage, faith, honesty, honor, etc - the things that truly matter in life.

Something I would have liked to see is a few pictures of the men described in their stories.  Not because the book is so big and in need of visual relief, but because it's always nice to put a name with a face. Unfortunately, however, there are none. But that's the only gripe I have with this book, and it's not even a major one.


I received this book free of charge from Booksneeze in exchange for my unbiased review. I have not been threatened, coerced, or promised reward in any way to provide a positive review. All opinions are mine.
at 7:11 PM