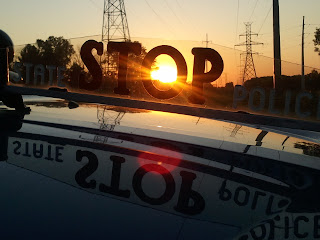 This is one of my favorite pictures I've ever captured...and it was Entirely by accident. The sunset in Michigan this past Thursday evening was glorious and I hoped to capture its magnificence. The first picture i attempted with one of our "Blue Gooses" just didn't do much. Then I thought to encapsulate the golden sun in the center of the "O" of the "stop sign". What you see is the result.

By the way, the stop sign is an old tradition in the Michigan State Police, dating back to The time we began driving cars on patrol. It used to be used as a tool to stop cars from the side rather than from behind. Now it's there primarily for looks, but can also be used at night to reveal who we are when we pull into an unsuspecting citizen's driveway at night.
at 9:14 PM